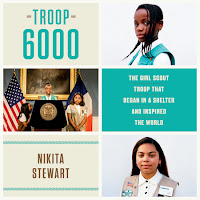 I am drawn to non fiction that informs me, teaches me and opens my eyes. Troop 6000 by Nikita Stewart is one of those books.

It's hard to see the subtitle on the cover but it reads 'The Girl Scout Troop That Began in a Shelter and Inspired the World'.

Giselle Burgess worked a full time job to provide for her five children. Rising rent, spiralling bills and health issues had her falling behind and finally.....homeless. She became one of the 60,000 people that are housed in one of New York City's homeless. shelters daily.

She and her five children lived for a year in a room at a Sleep Inn in Queens. Two beds, six people, one bathroom, no kitchen. Curfews, sign in and out procedures, rude 'resident care' staff and more. Giselle had worked for the Girl Scouts of America in the past and came up with an amazing idea - a Girl Scout Troop in the shelter. The ideas, ideals and community would help out not just the children living in the shelter but their parents as well.

Giselle is a force of nature. She made connections, weathered uncertainty, overcame adversity and kept on trying. And Troop 6000 was born. Investigative report Nikita Stewart wrote a story for The New York Times and that led to support, networking - and other troops. She followed the members of the original troop and the leaders for a year.

I became so immersed in the story of this group of women - their strength and determination. And that of the girls as well.

I chose to listen to Troop 6000. The reader was Robin Miles. She did a fantastic job of bringing this story to life. I find that listening to a book immerses me in a story more. This time for sure - I felt like I was part of the conversation. Miles has a pleasant voice, easy to listen to, well enunciated. She captured the tenor of the book well.  Listen to an excerpt of Troop 6000.

"Troop 6000 is both the intimate story of one group of girls who find pride and community with one another, and the larger story of how, when we come together, we can find support and commonality and experience joy and success, no matter how challenging life may be."

I had seen something about this on tv last year but would love to read this or “hear” this to get a more detailed account!

Patti - I hadn't heard of this story before seeing it available to borrow as an audio book from my library. I am hooked on audio books!

Mystica - it really was uplifting and inspirational.