It's only two weeks 'til Hallowe'en! DK Canada has some great books picked out for you in their Spooktober Boutique to get in the spirit of things. (yes, pun intended!)

Little Guy and Wee Girl have been enjoying Hallowe'en stories for a few weeks now. And they loved these two great books..... 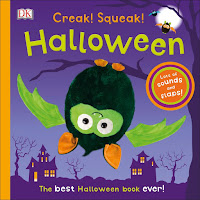 Creak! Squeak! Halloween was first up. This is a lift the flap book -with sound! That sound feature is activated by a switch on the back. (Batteries are secured by a screw and are replaceable)

We always enjoy first  looking at the cover of a booking and imagining what might be inside. No prompting needed - they guessed Hallowe'en right off the bat. (Yes, another intended pun!)

And the first page spread confirmed that guess with pumpkins everywhere. The left side of the page spread has a rhyming paragraph that reads really nicely. And on the right hand side is the question... "Who else is trying not to be seen?" Little Guy likes to guess, Wee Girl wants to lift the flap right away. They were both surprised by the sound as I hadn't mentioned that feature when we started reading. Well, they both had to do it numerous times before we could turn the page. There are five page spreads in total that continue this format. And most importantly, the images under the flaps are not 'scary' looking  at all - in fact they have very friendly faces. And on reaching the end? Back to the beginning to do it all again. Thumbs up from Gramma, Little Guy and Wee Girl! 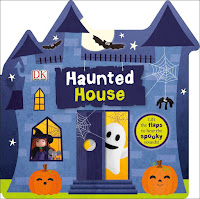 I hadn't mentioned that I had a second book to read - Haunted House. This time they were looking for the sounds! We stopped and looked at the cover first. A friendly looking witch is in the window. And Little Guy discovered that the front door slides open - to reveal another occupant - with sounds!

Again, there is a four line rhyming verse that has the reader who and what might be under the flap. The words 'they're okay/fine and having fun' are repeated with every flap page. There are five double page spreads. The first two pics under the flaps are a little bit scary LIttle Guy thought. The first one is a monster under a trap door. The image has sharp teeth and the laughing is a bit maniacal. Little Guy found these to be a 'little bit scary Gramma.' The other images were okay and the friendly witch on the cover appears on the last page. Subsequent readings made the images and sounds more familiar. Just that first read through of the unknown and unexpected gave him some pause.

The colours used are bright and draw the reader to the book. The pages are made of sturdy card stock and will take some 'stronger' page turning. The page flaps make for interactive reading. And the sounds add another layer. They'll be fun to pull out every season.

Gramma thinks books like this are clever and just plain fun to read. And so did Grampa! (Remember to turn the battery off when not in use!)
Posted by Luanne at 7:00 AM

DK books are fantastic! I love to recommend DK books to my students -- they especially like the history editions.