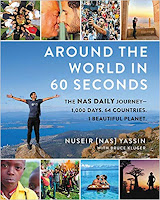 What book caught my eye this week as it passed over the library counter and under my scanner? Armchair travel with a twist.....

From the publisher, HarperOne:

"From the founder and creator of Nas Daily, a community of over 13 million that celebrates diversity, acceptance, and humanity, comes this surprising, moving 1,000-day journey of a lifetime in book form

60 seconds. That’s how long it takes to dispel stereotypes in Mexico. Throw a house party for strangers in Israel. Change perspectives in Nebraska. Make friends in Japan. And connect millions of people all over the world.

In 2016, Nuseir Yassin quit his job to travel for 1,000 consecutive days. But instead of the usual tourist traps, Nas set out to meet real people, see the places they call home, and discover what unites all of us living on this beautiful planet—from villages in Africa and slums in India, to the high-rises of Singapore and the deserts of Australia. While he journeyed from country to country, Nas uploaded a single 60-second video per day for his Nas Daily Facebook following to highlight the amazing, terrifying, inspiring and downright surprising sh*t happening all over the world. Thirteen million followers later, Nas Daily has become the most immersive travel experience ever captured, and finally shows us what we’ve all been looking for: each other.

Around the World in 60 Days is Nas’s surprising, moving, and totally unpredictable 1,000-day world tour in book form. At times a striking portrait of the most uncharted places in the world, at others a touching exploration of the human heart, this collection of life-affirming stories and breathtaking photographs changes how we think about humanity and invites us all on a journey to see the world, and each other, anew."