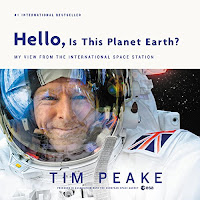 What book caught my eye this week as it passed over the library counter and under my scanner? A bit farther than a bird's eye view........Hello, Is This Planet Earth?: My View from the International Space Station  by Tim Peake.

From Little, Brown and Company:

"The #1 international bestseller: An astronaut’s tour of our planet from the heavens, featuring 150 mesmerizing photographs (with commentary) from the International Space Station

During his six-month mission to the International Space Station, astronaut Tim Peake became the first British astronaut to complete a spacewalk–and, perhaps more astonishingly, the first to run an entire marathon in space. During his historic mission, he captured hundreds of dazzling photographs, the very best of which are collected here.

Tim captures the majesty of the cosmos and of the planet we call home: breath-taking aerial photos of the world’s cities illuminated at night, the natural beauty of the northern lights, and unforgettable views of oceans, mountains, and deserts.

Tim’s lively stories about life in space appear alongside these photographs, including the tale from which the title is taken: his famous wrong number dialed from space, when he accidentally called a stranger and asked: “Hello, is this planet Earth?”

With this truly unique perspective on the incredible sights of our planet, Tim demonstrates that while in space, hundreds of miles above his friends and family, he never felt closer to home."

(Over the Counter is a regular feature at A Bookworm's World. I've sadly come to the realization that I cannot physically read every book that catches my interest as it crosses over my counter at the library. But...I can mention them and maybe one of them will catchy your eye as well. See if your local library has them on their shelves!)
Posted by Luanne at 7:00 AM