How I Lost You - Jenny Blackhurst 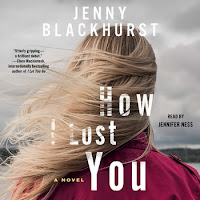 I liked the premise of Jenny Blackhurst's novel How I Lost You.

Susan Webster spent three years in prison for the murder of her three month old son Dylan. She doesn't remember doing it, but she must have - right? Now, released, she wants to try and start over under a new name. But when she receives an envelope delivered under her previous name, she worries. And when she opens it and finds a picture of a toddler named Dylan, she is stunned. Could it possibly be her child - still alive? Who has sent her the picture? And why? Susan simply has to see if Dylan could possibly be alive.

So, be prepared to suspend disbelief a bit - there are some plot twists that require the reader to accept some far fetched turns. Susan's naivete, joining forces with and becoming so close to Nick seemed a little too quick and easy. There are scenes from the past cut into the current day hunt for Dylan. These scenes become increasingly disturbing and lurid and it was here that How I Lost You lost some stars for me.

The publisher's description - "reminiscent of works by bestselling authors S.J. Watson and Ruth Ware" is a bit ambitious at this stage of Blackhurst's career in my opinion. Blackhurst is talented and I would be curious to see what she writes next.

I chose to listen to How I Lost You. The reader was Jennifer Ness and she did a fantastic job. Her voice matched the mental image I had of Susan. She also provided different (and believable) voices for the other characters. Her interpretation of the antagonist Jack was particularly effective - and chilling. Her diction is clear, easy to understand and pleasant to listen to. She varies her inflection, tone and speed, interpreting the story well. Listen to an excerpt of How I Lost You.
Posted by Luanne at 7:00 AM

Sometimes I have no problem suspending disbelief and other times I don't. I'll have to think about this book.