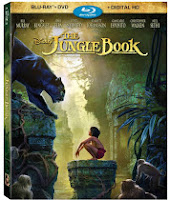 When I was young, I always begged my grandmother to read me stories from  her copy of The Jungle Book by Rudyard Kipling. I wanted to live in the jungle with those talking animals for friends. Walt Disney produced an animated version in 1967 that had music and comedy as the focus. And for the time, it was good.

But, director Jon Favreau's version of The Jungle Book  has just released on Blu-ray and DVD for home viewing - and I have to say - it is absolutely fantastic!

Favreau has employed 'live-action' filming. It is miles beyond that '67 version. You'd swear that the animals were real, yet the only 'real' actor is Mowgli - played by Neel Sethi. (His journey to being cast and his time on set is one of the special features) The all-star cast includes Bill Murray as the voice of Baloo, Sir Ben Kingsley as Bagheera and Lupita Nyong’o as the voice of mother wolf Raksha. Scarlett Johansson gives life to Kaa, Giancarlo Esposito  provides the voice of alpha-male wolf Akela, Idris Elba roars as the voice of Shere Khan, and Christopher Walken. These voices were absolutely perfect for each character. I have to say I probably enjoyed Baloo the most.

Favreau has stayed very close to the stories I remember. Even though I knew what would happen, I found myself caught up in the story, crying for the wolves, frightened of Kaa and Shere Khan and protected by Bagheera and Baloo. He's also included music from the '67 version. Walken's King Louie song is priceless. But my fave is Baloo's The Bear Necessities. Again, I can't stress how good the graphics are - check out the trailer below to see for yourself. The bonus features are great, giving you a look at behind the scenes. This new version is a wonderful tribute to Kipling's stories. Just excellent for this viewer.


This is a family film with a few caveats - there is a death and some danger. I'll be sharing the stories and movie with my grandson when he's a few years older. Until then, I am so happy to have this in my DVD library - I can still dream of living in the jungle with talking animals for family!


And if you too would like to add The Jungle Book to your library, enter to win a copy from this blog HERE. Ends Sept. 10/16.
Posted by Luanne at 7:00 AM

I need to see this!