What books caught my eye this week as they passed over the library counter and under my scanner? Food and driving this week......

First up is Driving Hungry by Layne Mosler.

From the publisher, Pantheon Books:

"A delicious memoir that takes us from Buenos Aires to New York to Berlin as the author, driven by wanderlust and an unrelenting appetite, finds purpose, passion, and unexpected flavor.

After putting her dream of opening her own restaurant on hold, Layne Mosler moves to Buenos Aires to write about food. But she is also in search of that elusive something that could give shape to her life. One afternoon, fleeing a tango club following a terrible turn on the dance floor, she impulsively asks her taxista to take her to his favorite restaurant. Soon she is savoring one of the best steaks of her life and, in the weeks that follow, repeating the experiment with equally delectable results. So begins the gustatory adventure that becomes the basis for Mosler’s cult blog, Taxi Gourmet. It eventually takes her to New York City, where she continues her food quests, hailing cabs and striking up conversations from the back seat, until she meets a pair of extraordinary lady cab drivers who convince her to become a taxi driver herself. Between humbling (and hilarious) episodes behind the wheel, Mosler reads about the taxi drivers in Berlin, who allegedly know as much about Nietzsche as they do about sausage. Intrigued, she travels to the German capital, where she develops a passion for the city, its restlessness, its changing flavors, and a certain fellow cab driver who shares her love of the road.

With her vivid descriptions of places and people and food, Mosler has given us a beguiling book that speaks to the beauty of chance encounters and the pleasures of not always knowing your destination." 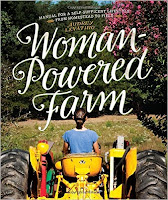 Next up is Woman-Powered Farm: A Self-sufficient Lifestyle From The Homestead To The Field by Audrey Levatino.

From the publisher, The Countryman Press:

"Women are leading the new farming revolution in America. Much of the impetus to move back to the land, raise our own food, and connect with our agricultural past is being driven by women. They raise sheep for wool, harvest honey from their beehives, grow food for their families and sell their goods at farmers' markets. What does a woman who wants to work the land need to do to follow her dream? First, she needs this book. It may seem strange to suggest that women farmers need a different guide than male farmers, but women often have different strengths and goals, and different ways of achieving those goals. Audrey Levatino shares her experiences of running a farm and offers invaluable advice on how to get started, whether you have hundreds of acres or a simple lot for an urban community garden. Filled with personal anecdotes and stories from other women farmers, from old hands to brand new ones, from agricultural icons like Temple Grandin, to her own sister, this book is a reassuring and inspirational guide.

Tips for keeping your mind, body and spirit healthy while undertaking the demanding nature of farm work It's all here, in the same warm and friendly voice that readers embraced in The Joy of Hobby Farming. Full-color photography throughout provides step-by-step instructions for anything you’ll need to do on your farm."

"Hey luanne, glad to know you and i am a seller on Amazon.ca, after reviewing your wonderful review ,we want to send you free samples exchange for your review , so i contact you , we will appreciate it if you can work with us . Thanks so much
Sincerely
Nancy "