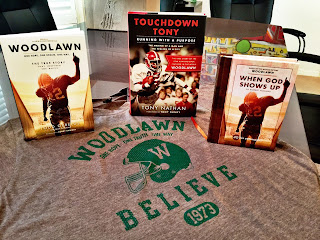 I love movies - but the ones I enjoy the most are those based on true stories.

Woodlawn is one of those true stories - and it's an amazing one. The movie releases in theaters everywhere on Friday, October 16/15. To celebrate, I have a Woodlawn prize pack to giveaway to one lucky reader!

But let me tell you why Woodlawn is such an amazing film.... Here's the synopsis:

"A gifted high school football player must learn to boldly embrace his talent and his faith as he battles racial tensions on and off the field in Woodlawn, a moving and inspirational new film based on the true story of how love and unity overcame hate and division in early 1970s Birmingham, Ala. Tony Nathan (newcomer Caleb Castille) lands in a powder keg of anger and violence when he joins fellow African-American students at Woodlawn High School after its government-mandated desegregation in 1973. The Woodlawn Colonels football team is a microcosm of the problems at the school and in the city, which erupts in cross burnings and riots, and Coach Tandy Gerelds (Nic Bishop) is at a loss to solve these unprecedented challenges with his disciplinarian ways.

It’s only when Hank (Sean Astin), an outsider who has been radically affected by the message of hope and love he experienced at a Christian revival meeting, convinces Coach Gerelds to let him speak to the team that something truly remarkable begins to happen. More than 40 players, nearly the entire team, black and white, give their lives over to the “better way” Hank tells them is possible through following Jesus, and the change is so profound in them it affects their coach, their school and their community in ways no one could have imagined."

Get a sneak peek - watch the trailer below. I'll be watching - look for my review.....

The prize pack includes:
Enter to win, using the Rafflecopter form below. US only. Ends Oct 24/15.

Thanks for an amazing giveaway

Thanks for this lovely giveaway. saubleb(at)gmail(dot)com

I hadn't heard of this book or movie, but it sounds great. I love inspirational true stories.

This sounds like a great inspiring movie. Anything with Roma Downey involved is wonderful, and Sean Astin is always a joy to watch. Thanks for the giveaway.

It sounds really good. Thanks for having the giveaway.

I love football and football movies. Right now I'm a proud varsity mom of a d-tackle!

Great prize pack! I would love to read this!