Calling all mystery fans - I've got an amazing giveaway for you today! The Forgotten Girls by Sara Blaedel (Denmark’s “Queen of Crime”) is releasing in paperback  - and I have three (!) copies to giveaway.

"In a forest in Denmark, a ranger discovers the fresh corpse of an unidentified woman. A large scar on one side of her face should make the identification easy, but nobody has reported her missing. After four days, Louise Rick--the new commander of the Missing Persons Department--releases a photo to the media. An older woman phones to say that she recognizes the woman as Lisemette, a child she once cared for in the state mental institution. But Louise soon discovers something more disturbing: Lisemette had a twin, and both girls were issued death certificates over 30 years ago. As the investigation brings Louise closer to her childhood home, she uncovers more crimes that were committed--and hidden--in the forest, and finds a terrible link to her own past that has been carefully concealed."

It's a great read - and you can sample an extended e-preview of the first five chapters here.

Who else likes Sara Blaedel? (Two of my favourite crime authors)

"One of the best I've come across.” —Michael Connelly "

"Sara Blaedel is a force to be reckoned with. Everyone keeps talking about the 'trend' in crime writers--Scandinavian, German, Russian. Blaedel is no trend. She's a remarkable crime writer who time and again delivers a solid, engaging story that any reader in the world can enjoy.” —Karin Slaughter 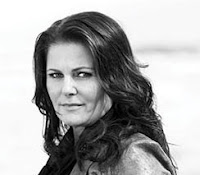 Sara Blaedel is the author of the #1 international bestselling series featuring Detective Louise Rick. Her books are published in 23 countries. She lives in Copenhagen, and was voted Denmark's most popular novelist for the fourth time in 2014. You can connect with Sara Blaedel on her website, as well as on Twitter and like her on Facebook.

If the Forgotten Girls sounds like a great read to you, enter to win one of three copies using the Rafflecopter form below. Open to US and Canada. Ends October 17. Good luck!

I'm trying to remember whether I've read other books by this author. I think I have but won't go look right now. This one looks perfect. ;-)

Thanks for the chance to win!

Thanks for another great giveaway!

Thanks for this intriguing giveaway. saubleb(at)gmail(dot)com

I would love to read this mystery!

A really good storyline and I would love to read this book.

I've read another good review of this book, too. So I hope to read it.

Sounds chilling my type of book.

The storyline has me intrigued. Thanks for the contest.
suefarrell.farrell@gmail.com

Sounds like an intense thriller! Would love to get a chance to read it.

This sounds like a great psychological thriller, and I love those! I love a new-to-me author and love that Karin Slaughter recommended her.

I've been curious about this book for months. Sounds fab.

This sounds like a book I would enjoy. I love finding new authors to read! Thank you!

No one does crime fiction like the Scandal-navians; I don't know why, but I sure do love the product! Thanks for featuring this book and a chance to win it. Cheers, Kara S

I like reading crime novels of other countries to see the differences in procedure and justice systems.

This looks really good, thanks!

Thanks for introducing me to a new author.

Sounds exciting! I like the Denmark location. Thanks for the giveaway.