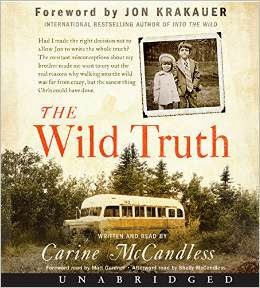 I read John Krakauer's book Into the Wild back in 1996. I remember being unable to put the book down and that my emotions were all over the place. And yes, I cried in the final pages. But throughout it all was the question - why? When Sean Penn made a movie of the same name, I decided not to see it. After all, I knew how it ended right?

But although the ending is known, perhaps not so much for the beginning. And the answer to that question - why?

Twenty two years after Chris McCandless starved to death alone in an old bus in Alaska, his sister Carine McCandless has decided to provide some answers to that question - why - in her new book The Wild Truth.

I chose to listen to this book as it was McCandless herself who read it. I find hearing the words spoken out loud from the person who lived it is powerful. Carine's story is by turns horrifying and heartbreaking. It is a story of secrets and domestic violence.

And here's my dilemma. Yes, the book reveals what life was like for children in this home. And, yes I can see why Chris left to find his own peace. I appreciate Carine's candor in finally exposing the secrets her family held. So, although the book's main premise is to shed light on Chris's past and  on his choices, the book is really about Carine.

And I enjoyed listening to it. I appreciate the candor and honesty of exposing one's self and life to the world. But a wee part of me wonders why Carine continued to have contact with her parents over the next twenty years - asking for financial assistance, trying to mediate their fights and hoping for a breakthrough. Some pretty horrific stuff is described as happening with her parents and Chris's leaving makes sense. And I know  - 'walk a mile....' but I am a loss as to why Carine continued to interact with what are described as thoroughly toxic and dysfunctional parents. Still, I found The Wild Truth a compelling listen, no matter the focus.


From an interview with Outside magazine: Carine - "The book is about Chris, but it’s more of a survival story. The best way I can help people learn from Chris and our experiences and our childhood is to show them directly how I learned from Chris and how I learned from our family’s dysfunction, how I survived. So I utilize myself in both positive and self-deprecating ways. I can’t criticize other people for not learning from mistakes if I don’t acknowledge my own mistakes and what I learned. This book very much goes into all of that." Read an excerpt of The Wild Truth.