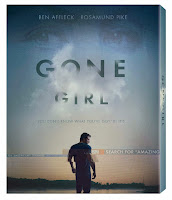 Gillian Flynn's novel Gone Girl is one of the twistiest thrillers I've ever read. When I heard there was a movie being made, I got excited....and then nervous. How would the book translate to the big screen? Would they 'adapt' from the book? Or would it stay true to Flynn's premise. I always worried that a loved book will be ruined for me by a bad adaptation. Well, with one thing and another, I never did get to the theatre to see it. But the reviews were fantastic!

Gone Girl is newly released on Blu-ray from Twentieth Century Fox Home Entertainment, so I finally sat down to watch it last weekend. O.M.G. I loved it!!! All the worries about ruining the book were put to rest - Gillian Flynn actually wrote the screenplay! And director David Fincher nails it.

For those of you who haven't read the book or seen the movie (and you really should) here's a quick synopsis. On the morning of their fifth anniversary, Nick Dunne's wife Amy cannot be found. When signs of violence are found, a massive Find Amy campaign is mounted in addition to the police investigation. And of course, Nick becomes a suspect. He swears he's innocent and that he's being set-up.....

Great casting! Ben Affleck plays his part well - his attitude, demeanor and actions change quickly depending on who he's with - and he's believable. What persona is the truth? The supporting cast is just as stellar. Tyler Perry and Neil Patrick Harris always turn in great performances. I really enjoyed Carrie Coon as Nick's sister and Kim Dickens as the detective looking into Amy's disappearance. But Rosamund Pike as Amy stole the show for me. She was the perfect choice - she too is a chameleon changing with whatever situation she's in or who she's 'performing' for. And does it all with a smile on her face....that doesn't reach her eyes......

What a fantastically devious cat and mouse game. The viewer is pulled in one direction and then abruptly the rug is pulled out from underneath you - and the game changes - and then changes again. Absolutely, positively recommended! Gone Girl is one of the few movies I would watch again. Watch the trailer below and you'll see what I mean.....

The Blu-ray includes a director's commentary and an 'Amazing Amy Tattletale' book - a delightful little book that is so wrong - and so right for the movie.

I loved the book, but I also really loved the movie!! The tone, the pace, the feel was captured perfectly! It was eerie, creepy, and just overall great. The cast was great. I always recommend this to people just because it's such a unique story.

I read the book so I knew what was going to happen but could still feel the tension in the movie.

I think you are right about Rosamund Pike. I've read the book and not yet seen the movie. Anyway, the first time I remember seeing Ms. Pike was in a James Bond movie and she played a mole in MI6. She had this vacant expression, very unemotional. I could totally see her as Amy. I wasn't the biggest fan of GONE GIRL, but I still feel a need to see the movie.

didn't go to the film.

now that it's out on blue ray, think I will rent it...