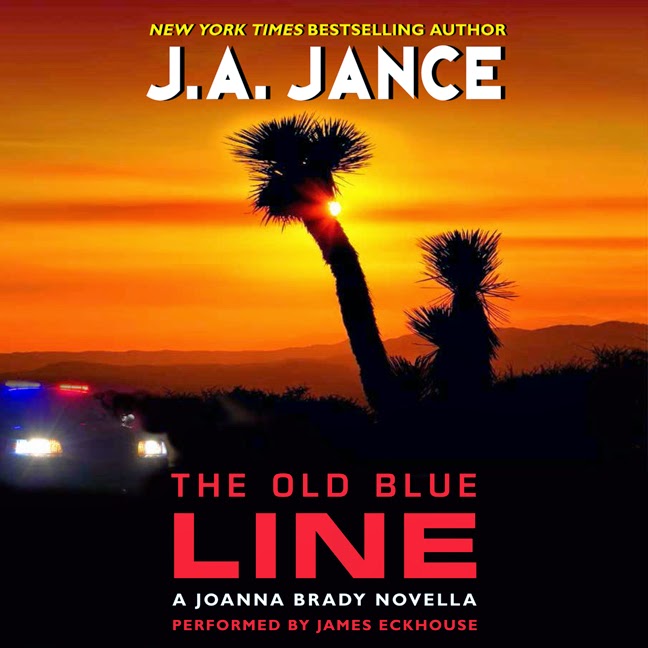 J.A. Jance writes a number of series, but my favourite is Sheriff Joanna Brady.

The Old Blue Line has been marketed as 15.5 in the series, as it is a novella. (The newest novel, Remains of Innocence has just released.)

The Old Blue Line is actually Joanna's husband, Butch Dixon's story. Jance takes us back to the days before Butch met Joanna.

Butch lost everything to his ex-wife seven years ago. He's made a new life for himself and no runs the Roadhouse Bar and Grill. But when the ex-wife is found murdered, Butch is the prime suspect. Even in death, Faith is out to get him. But Butch has friends - namely The Old Blue Line gang - retired cops and lawyers that are determined to clear Butch's name.

Butch has always been a great supporting player in the Brady books, but we really don't know too much about his background. This little novella is told completely in Butch's voice. ( Joanna only makes an appearance in the last few pages.) The mystery in this case is short and sweet, as is the book, but it's still enjoyable. It was more about getting to know Butch better. Although, I'd like to see more of The Old Blue Line gang in future books.

I actually chose to listen to The Old Blue Line. The reader was James Eckhouse.  Eckhouse's voice is pleasant and easy to listen to, with clear diction. He's an expressive reader, using his voice to good effect. Eckhouse works as an actor and is good 'performer' in audio format as well. Listen to an excerpt of The Old Blue Line.