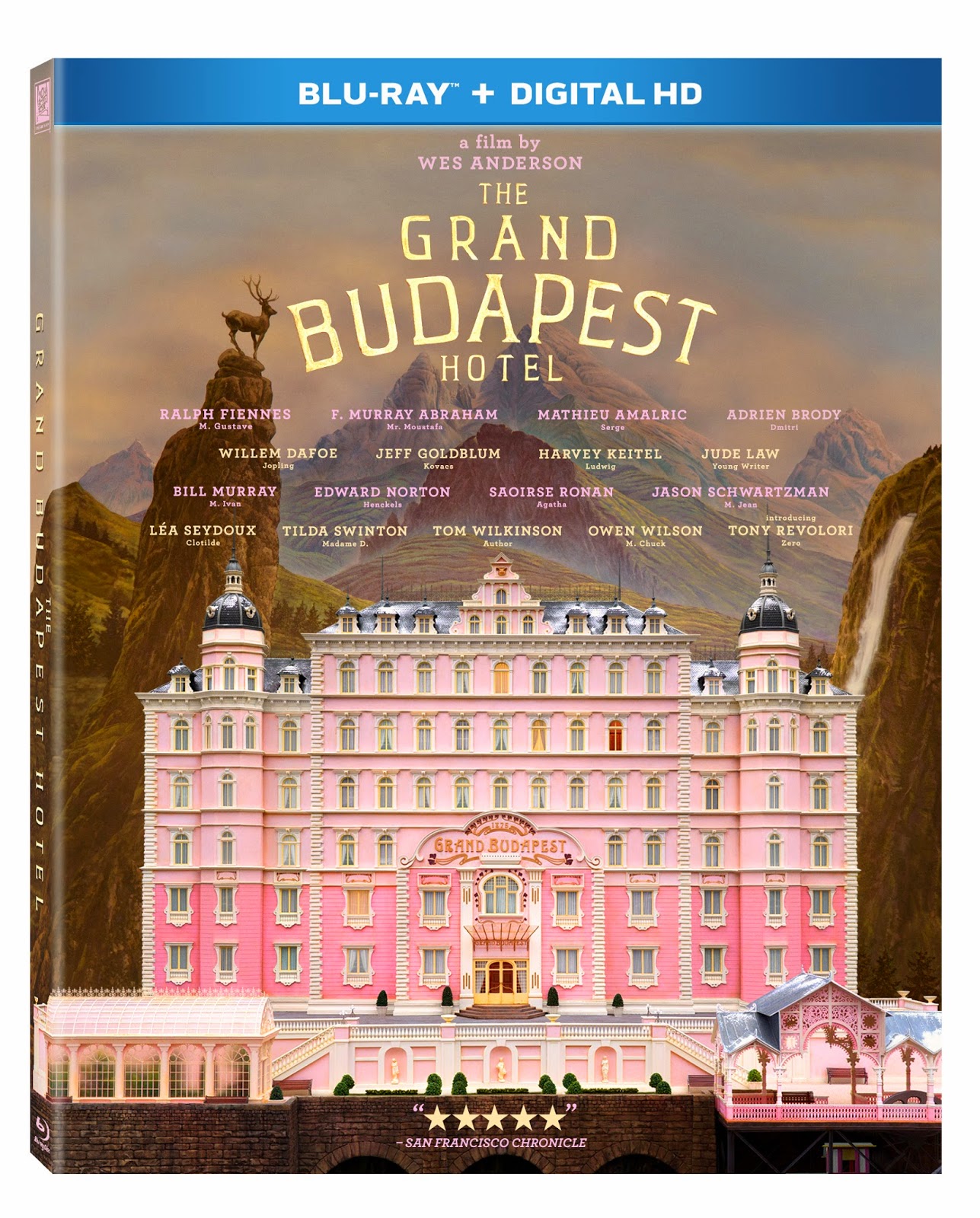 The Grand Budapest Hotel releases tomorrow! This is a movie I can't wait to watch! Thanks to the great folks at Twentieth Century Fox Home Entertainment, I have a Blu-Ray copy to giveaway to one lucky reader!!

"THE GRAND BUDAPEST HOTEL recounts the adventures of legendary concierge Gustave H. and Zero Moustafa, the lobby boy who becomes his most trusted friend. The story involves the theft of a priceless painting; a raging battle for an enormous family fortune; and a desperate chase on motorcycles, trains, sleds, and skis - all against the backdrop of a suddenly and dramatically changing continent."


Wes Anderson’s Troupe of Unforgettable Characters
Part of what makes Wes Anderson’s films so iconic is his recurring troupe of talented actors in unforgettable roles and cameos. This gallery takes a look at the actors Anderson can’t stay away from and the roles that defined their collaboration.

"Bill Murray: The iconic actor is a strong supporter of Wes Anderson’s works and has appeared in most of his movies starting their amazing relationship with Rushmore. For Rushmore, where Murray portrayed a wealthy industrialist, Anderson revealed to have paid the actor the bare minimum allowed by the Screen Actors Guild ($9,000). Bill Murray has admitted that the part of Steve Zissou in The Life Aquatic was one of the hardest roles he’s ever played and that the main reason he did it was because Wes Anderson was helming it. I’m sure we can all agree that that decision contributed to the cementation of their future collaborations.

Tilda Swinton: Tilda Swinton arrived relatively late to the Wes Anderson game but has appeared in his last two consecutive films in very different roles. In Moonrise Kingdom, which has become the movie that defined her collaboration with Anderson, she played Social Services while in The Grand Budapest Hotel she underwent a major transformation to become an elderly woman who ultimately succumbs to her evil son’s antics.

Owen Wilson: Starting this list off is Owen Wilson who was been in seven of Anderson’s eight films. From Bottle Rocket to Fantastic Mr. Fox and the newest The Grand Budapest Hotel, Anderson’s audiences can assume that Wilson is one of his closest colleagues. In fact, Anderson first met the actor at the University of Texas in Austin where they immediately became friends. Wilson’s defining role is, arguably, that of Eli Cash in The Royal Tenenbaums. This part brought out Owen Wilson’s unmistakable wit, which seems to be lost amongst some of his most uncouth movies.

Anjelica Huston: Huston’s roles in Wes Anderson films usually feature her as the matriarch of a quirky family. Along with Bill Murray, Anjelica Huston is one of the seasoned veterans heading Anderson’s great cast of characters. She played part in three of his movies starting with The Royal Tenenbaums where she perfectly captured his vision for the role. We haven’t seen her in Anderson’s latest films, but she is sure to make an appearance in his future works.

Jason Schwartzman: The role of Max Fischer in Rushmore was the one that defined Jason Schwartzman’s collaboration with Wes Anderson and his acting career in general. When he auditioned for the part, Schwartzman was 17 and dreamed of being a writer, not an actor. Almost ten years after Rushmore, he co-wrote the script for The Darjeeling Limited and has been in every Anderson film since.

Luke Wilson: Aside from helping Owen Wilson express his great comedic timing, another certain Wes Anderson movie also helped launch the successful career of Owen’s brother Luke. Luke Wilson co-starred in Bottle Rocket and then went on to participate in a slew of Hollywood films that now make up his long roster of accomplishments. Wilson collaborated with Anderson in some of his other movies such as Rushmore and The Royal Tenenbaums."

If you'd like to watch The Grand Budapest Hotel, simply leave a comment telling me which actor is your favourite for a chance to win a Blu-Ray copy! Open to US and Canada. No PO boxes please. (Ensure I have a way to contact you, either through your blog, email etc)
Ends June 29/14
Posted by Luanne at 6:30 AM

My favorite actor in the movie is Bill Murray. Thanks for the giveaway! kathy(at)bermudaonion.net

My favorite actor in The Grand Budapest Hotel is Adrien Brody. eric.planted@yahoo.com Thank you for the giveaway!

My favorite actors in The Grand Budapest Hotel are actually Ralph Fiennes (wonderful as M. Gustave!) and Saoirse Ronan (Agatha has such spunk!). But out of the list of actors in the blog, I would have to say Bill Murray is my favorite. He is such a decorated actor. It is a pleasure watching him in this movie. mboltuch(at)gmail(dot)com

Thank you so much for this opportunity!

My favorite actor in The Grand Budapest Hotel is Adrien Brody. saubleb(at)gmail(dot)com

Jeff Goldblum is my favorite actor in the movie. Many thanks. elliotbencan(at)hotmail(dot)com

JUDE LAW - scholar, speculator, co-conspirator and a vision in that hot bath!

my favorite actor is Edward Norton

Bill Murray is my favorite actor in this movie. I've been a big fan of his movies Ghostbusters, Zombieland, Groundhog Day and all his appearances in Wes Andersons movies. BWallace1980(at)Hotmail(dot)com

My favorite actor in The Grand Budapest Hotel is either Tony Revolori or Adrien Brody.
fenevar@mcnealsonline.com

Bill Murray is my choice!
kpbarnett1941[at]aol.com

Anjelica Huston! You can't beat a classic actress! She always has some sort of strange allure to her!

I would pick Bill Murray as my favorite.
mce1011 AT aol DOT com

I would have to pick bill murray. Hes fantastic!
Julie dot sherritt at gmail dot com

It's a difficult choice, everyone was fantastic in the movie, but I'm a diehard Bill Murray fan!

Bill Murray has been a favorite of mine for years, but Jeff Goldblum is a close second.
suefarrell.farrell@gmail.com

My favorite actor in this movie is Owen Wilson. I love all of his movies. Thanks for having the giveaway.

Bill Murray is my favorite!
dez3b@yahoo.com

Adrien Brody ! He's one of my favorite and I want to see him in Grand Budapest
brentbrent00@gmail.com

I am always a fan of Bill Murray.
Doug.williams@lpl.london.on.ca