The Ocean at the End of the Lane - Neil Gaiman 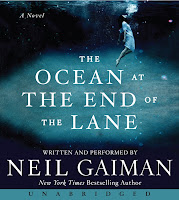 I listen to audio books back and forth in the car on the way to and from work. Usually I leave the discs in the car to be continued the next day. Not this time.

Neil Gaiman himself is the reader on the audio version of his latest book, The Ocean at the End of the Lane. There is something magical about hearing an author perform their own work. And in this case - it truly was magical.

Our unnamed narrator returns to his childhood home for a funeral. He vaguely remembers a house at the end the lane and drives down to see if it is still there. When he arrives, he begins to remember bits and pieces.....especially eleven year old Lettie Hempstock, who befriended the then seven year old narrator. Lettie live with her mother and grandmother. Out back of the farmhouse is a pond - one Lettie used to call the ocean. And as our narrator wanders back to it, he remembers more....something dark was set loose that summer.

Cautionary advice - this isn't a tale for children, even though it is written from a seven year old's viewpoint - there are adult scenes and themes. You could read/listen to The Ocean at the End of the Lane and get something different from it each time. A fantastical tale, a tale of childhood and our fears that most could relate to or perhaps a glimpse into Gaiman's own childhood.

What a treat to hear Gaiman read his own tale - the inflections given, the pauses taken, the emotions imparted - all from hearing them spoken out loud.

And at the end of the last disk, I felt like a child whose parent closed the book and turned off the light with a 'it's time to go to sleep now." And I never did - I always relived the story and wondered what else might happen. The Ocean at the End of the Lane left me with exactly that feeling - and that's a good thing.

Listen to Neil Gamain read an excerpt of The Ocean at the End of the Lane below. You can find Neil Gaiman on Facebook and on Twitter.

Gaiman is awesome, and I love listening to audiobooks while I clean or knit or craft ... I always feel kind of hit or miss with them, though, because a lot REALLY depends on the narration. THIS one, however, sounds like a worthwhile listen! Thanks for the review!

This book is getting serious love! I can't decide if I want to read it now or wait for the buzz to die down.

I just finished this on audio as well and it is definitely going to haunt me for awhile. I may need to revisit all of his books on audio - he's such a good narrator!

I really enjoyed this book as well! I zipped through it in a day. I didn't know that Gaiman narrated this one, or I would have listened to it instead! You really can't get much better storytelling that from the man who created the story.

Just what I need is another book on my reading list but this one sounds good. Thanks for sharing