P.G. Wodehouse is a beloved icon in humourous fiction writing. The Blandings tales span the years, first appearing in 1915, with the last left unfinished with Wodehouse's death in 1975. I was absolutely delighted to learn that the BBC has filmed six episodes and Acorn Media has just released the series based on the inhabitants of Blandings Castle in North America. But, would these beloved characters make the leap to film?

For those who haven't read the books, Blandings Castle is home to Lord Emsworth, his sister Constance, his butler Beach, his son Freddie and an ever changing rota of relatives, visitors and servants. The DVD series is set in the 1920's.

Timothy Spall (Churchill in The King's Speech) was perfectly cast as the 'lord of the manor' whose preoccupation with his prize pig, The Empress, tops anything else. All he wants is to be left alone to potter in his study or garden. He's quite forgetful and muddles through with the help of Beach. Although, he does wield his lordly influence when necessary. Mark Williams played an admirable butler, with a enigmatic demeanor presented up front, and a tipple in the pantry to help the day along. Lord Emsworth's widowed sister Constance - brilliantly played by Jennifer Saunders (Ab Fab) - is determined to bring improvements to both the castle and her brother's life. Her severe pronouncements and scathing facial expressions are enough to scare anyone into submission. Jack Farthing as Freddie stole the show for me though. Freddie is the younger son - a charming womanizer who is always in debt, a little slow on the uptake and who runs home when his finances run low. Farthing excelled in bring Freddie to life. His delivery of Wodehouse's words was spot on and his facial expressions were comical. I quite enjoyed seeing what rakish outfit he would wear next as well.

The physical acting is as much a part of the comedy as the words - exaggerated eye rolls, gestures, pratfalls and more. I found myself watching for Freddie to run into the same tree with the opening of each episode.

I admit to being enthralled with British authors and British television. Blandings combined the best of both for me. This is comedy that is timeless and truly funny. Blandings reminded me so much of the innocent comedies I watched as a youngster. No laugh track (thank goodness!) but occasional background music adds to the episode. I found myself laughing out loud so many times. Blandings was a half hour of farcical fun that was the perfect way to leave the day's stresses behind.  I'll be watching for Season 2. And re-watching Season 1! 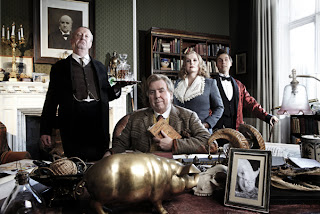