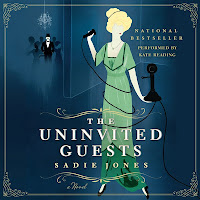 I chose to listen to Sadie Jones's latest book - The Uninvited Guests. I was glad I did, as the book had the feel of a radio play to me.

1912. A rambling old manor in England. It is the night of Emerald Torrington's twentieth birthday. Preparations have been made and guests invited. But a nearby railway accident results in the house and party acquiring many more guests from that crash. The family is able to stow most of them away in the morning room. But one gentleman brashly joins the family at their dining table. And his presence takes the night into darker territory in more ways than one....

Jones captures the "I daresay old chap" attitude and dialogue perfectly. Kate Reading was the reader. I had a bit of an issue with her voice at first as I had recently listened to her read another book that I didn't overly enjoy. I had to separate that character from this book. However, she is an excellent reader. She has a British accent, but one that is easily understood. She enunciates very clearly and has a different way of placing emphasis on certain words by either drawing them out or biting them off. She portrayed both male, female and child roles with very different (and believable) voices, matching them well to the characters.

The first three quarters of the book is character driven. Jones excels at manipulating her characters and our reactions towards them. Things change rapidly as the night goes on and so do our players. I quite enjoyed this dark interplay. However I can only describe the last quarter of the book as, well - odd. I wasn't exactly surprised at the direction the story took - there were enough allusions to guess. But what had me scratching my head were some of the things that did happen  - they seemed forced into the story for I'm not sure what reason. (I know I'm being a bit obtuse but I don't want to provide spoilers) I had enjoyed the book up to this point, but felt let down with the end run Jones chose.

I still enjoyed this as a good listen, but not as much as I had hoped to.

Listen to an excerpt of The Uninvited Guests.

Didn't read your whole post, 'cause the book sounds sooooo goooood, I didn't want to spoil it in any possible way.

I know! You don't give spoilers! But I just choose not to read whole post. (Don't get mad at me, for saying that) ((Please...))

Hm, I'm wondering what was going on with the ending to the book. I've listened to Kate Reading before and she's not my favorite narrator so I'll stick to this one in print.

Mystica - I enjoyed listening more than I would have reading for sure.

Oh Auntie - how could I ever get mad at you!

Kathy - Yes, Kate narrated the Cornwell books and it comes across as 'snotty' to me if that makes any sense.

I read The Uninvited Guests a few months ago and quite enjoyed it. It was an odd bit of a tale but I liked that it was original. I found it to be well-written and if you like a bit of a twisted story, you'll enjoy this one!

Oh this book sounds delightful! It's too bad about the odd ending but I will definitely check it out regardless

Hi I just stumbled across your blog and I see that we have similar reading tastes, so I am now your newest follower. I would love for you to stop by my blog and check it out. I really hope to see you there and happy reading!