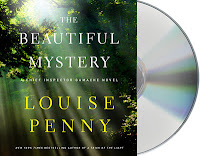 The Beautiful Mystery is the eighth entry in Louise Penny's Chief Inspector Armand Gamache series. This series has become one of my favourites, but I have to say that this latest book is exceptional.

The series is set in Canada. Gamache is with the Sûreté du Québec, as is his second in command, Jean-Guy Beauvoir. In The Beautiful Mystery, Gamache and Beauvoir are called out on an unusual case and location. A monk at a monastery hidden away in the wilds of Québec has been murdered. The monastery has rebuffed visitors for the last four hundred years. There are only twenty four residents, all who live with a vow of silence - except when they are singing ancient Gregorian chants. Twenty three suspects.

Penny has yet again devised an ingenious 'closed room' mystery that had me guessing until the last pages. The exploration of the monastic lifestyle and the chants were especially interesting. In her acknowledgments Penny says "I wanted to explore this beautiful mystery. How just a few notes can take us to a different time and place. Can conjure a person, an event, a feeling. Can inspire great courage, and reduce us to tears. And in the case of this book, I wanted to explore the power of ancient chants, Gregorian chants. On those who sing them, and those who hear them." The explanation of the effect of the music on the listener was compelling.  I listened to the audio version of this book and the inclusion of chants at the beginning and end of the book prompted me to put holds on some Gregorian chant CDs at the library.

But the real draw of Penny's books are the characters - especially Gamache. He is such a wise, intuitive, caring person. But he has faced his share of heartache - most notably with Beauvoir. A previous case has left both men physically and emotionally damaged. The healing has started, but has miles to go. A surprise appearance by Gamache's superior at the monastery complicates things further.
And take Gamache to a very dark place. I become so invested and immersed in the characters that populate Penny's novels that they almost feel quite real. Gamache and Beavoir's complicated relationship and their attempts to continue moving forward despite the past make them all the more believable.

Penny's storytelling is rich and varied, full of nuance and inflection. The pared down setting for this book was perfect, echoing the raw truths that are exposed. The ending has only left me hoping that Penny gives us more Gamache before too much time elapses.

I chose to listen to this latest book and may well do so with all the Gamache books. There's always a worry that a narrator will not be the right fit for the mental image you've created for a character. Ralph Cosham was the reader for The Beautiful Mystery...and he was perfect. He has a rich, full bodied voice that is deep and sonorous, conveying the quiet strength of Gamache.  The cadence, rhythm, pauses and more sound like actual conversation, not simply a reading of pages. The accent passes muster and is easily understood.

Just an absolutely fantastic read/listen/series - highly recommended. Listen to an excerpt of The Beautiful Mystery or Read an excerpt. You can find Louise Penny on Facebook.

I read this book very recently and found it all that I had hoped for. My only regret is that we have to wait another year for the next entry into this wonderful series. I predict that more awards are in the offing for this author.

Yet another author I need to try.

Wasn't it good Kay! Kathy - you will really like this character adn series.

I've read one. Got to get to these books again.