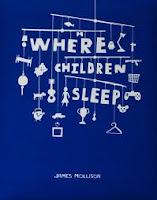 What book caught my eye this week as it passed over my library counter and under the scanner? Where Children Sleep by James Mollison. Although the cover isn't overly eye-grabbing, the inside is. This was more than a quick browse for me - it was a fascinating photo essay book I couldn't put down.

"Where Children Sleep presents English-born photographer James Mollison's large-format photographs of children's bedrooms around the world--from the U.S.A., Mexico, Brazil, England, Italy, Israel and the West Bank, Kenya, Senegal, Lesotho, Nepal, China and India--alongside portraits of the children themselves. Each pair of photographs is accompanied by an extended caption that tells the story of each child: Kaya in Tokyo, whose proud mother spends $1,000 a month on her dresses; Bilal the Bedouin shepherd boy, who sleeps outdoors with his father's herd of goats; the Nepali girl Indira, who has worked in a granite quarry since she was three; and Ankhohxet, the Kraho boy who sleeps on the floor of a hut deep in the Amazon jungle. Photographed over two years with the support of Save the Children (Italy), Where Children Sleep is both a serious photo-essay for an adult audience, and also an educational book that engages children themselves in the lives of other children around the world."

I'm glad the book is good - I think the cover's a little creepy.

Yeah, I have to agree. Totally creepy cover!