The House of Velvet and Glass - Katherine Howe 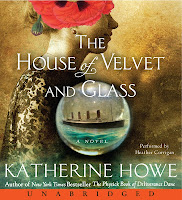 The House of Velvet and Glass is Katherine Howe's latest release, following her hugely successful first book, The Physick Book of Deliverance Dane.

Sybil Allston is keeping house for her father in 1915 Boston. Her mother and sister perished on the Titanic three years earlier. She's never really accepted or gotten over their deaths and has been seeking answers and solace from mediums and the spirit world. Sybil is not the only one in her family struggling with life. Her father has escaped into running his business, her brother has dropped out of Harvard and taken up with an actress. It is the actress, Dovie, who shakes up and wakes up the remaining members of the Allston family. She introduces Sybil to the pleasures of opium.....and Sybil is sure she can see the final hours of her mother and sister in a scrying glass when she is in the arms of the opium pipe...

Howe has delivered another rich period piece, filled with many details that bring the Boston Brahmins, social life and mores of the times to life. Interspersed with Sybil's story are 'interludes' that give us a window into Eulah and her mother's final hours on the Titanic. I have to say, it is Eulah and the interludes I enjoyed the most. Eulah as a character drew me to her more that Sybil. Eulah is full of life and brashness and spirit. She embraces life, as short as hers will be. Sybil is equally well drawn, but life has taken on a different mien with her loss.  I did come to appreciate her more as the book progressed.

I chose to listen to this book. The reader was Heather Corrigan. At first, I thought her voice was too young and sweet to tell this story, but quickly realized that that is exactly the tone to tell Sybil's story. Corrigan has a light voice, enunciates well and is easy to listen to.

The House of Velvet and Glass is not a fast read,rather it is a slow, measured building towards an unexpected revelation.The last third of the book moves along quite quickly, including another setting and more from one character that I been had expecting.

Howe has crafted another unique offering that will appeal to historical fiction fans. I enjoyed the book, but personally prefer something that moves along a little faster. Read an excerpt of The House of Velvet and Glass.

Hm, historical fiction isn't my favorite genre so I'll have to think about this book.

I was so-so about The Physick Book of Deliverance Dane, so I'm not sure I'd want to read this one. I found the over use of details to be distracting. Is it the same in this book?

Sounds like a really interesting book. I'll have to check at my library for a copy as I'm always looking for recommended audiobooks