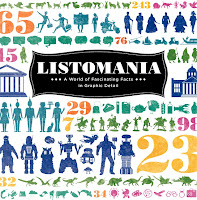 This was such a fun book!! I'm a sucker for those best of books and year end compilations but Listomania  from It Books is absolutely addicting.

I've had this book for a bit and have been picking it up over the course of the last month and I've read every page at last. We've had so much fun at home asking each other if we can come up with some of the entries on the list. Examples? There are 62 rooms you might find in a house...name as many as you can.There's a list of movies with 'ridiculously high body counts'...any thoughts? Movies with giant rabbits?

There are so many topics covered - the book is broken down into eight great sub categories. Lists pull in facts from around the world. But it's not just dull lists on a page. Each page is completely different. The graphic presentation of the facts is shown through photographs, charts, graphs, drawings and more, all in full colour.

Many of the entries had me going to the computer to follow up, such as '14 Cool Things to View on Google Earth.' In Chile, 70,000 Coke bottles spell out the company logo. Or the Badlands Guardian in Canada.

This is one of those books that everyone will enjoy. Leave it out on the coffee table - it's like a bag of chips - you won't be able to just rhard to resist....Can you name a karaoke song that makes the top ten list in the US and England -- hint: it's a Madonna tune. What 13 crayon colours has Crayola retired? What country has the fastest internet connections in the world? Name the top 10 cheese eating countries in the world. What is....

Email ThisBlogThis!Share to TwitterShare to FacebookShare to Pinterest
Labels: It Books, non fiction

This sounds like a great book to while away a long car trip! Thanks for posting.