The House of Silk - Anthony Horowitz 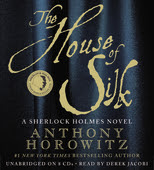 Once I discovered Sherlock Holmes in my younger years, I devoured every tale, fascinated with Holmes' powers of observation and deductions.

Sir Arthur Conan Doyle died in 1930. The House of Silk by Anthony Horowitz is the first time a new Holmes story has been sanctioned by his estate.

I started to listen to the book with, I must admit, with more than a little trepidation. Would it do justice to Doyle's characters? Would the story have the same 'feel'?

1890's London England. Sherlock Holmes is called in by an art dealer who fears a member of the Flat Cap Gang has followed him from America to Britain and means him harm. Aided by the trusty Dr. John Watson, Holmes begins investigating - aided by the young Baker Street Irregulars. One of the boys ends up dead - and the case leads to places and people that believe they're untouchable. And really you don't need much more of the plot, as it truly is a Sherlock tale. Horowitz has done a fantastic job of recapturing the tone of previous works - the back and forth between Holmes and Watson, the clues and deductions, the Victorian settings and more.

As I mentioned, I chose to listen to the audio version. And am I ever glad I did!  Derek Jacobi did a simply amazing job. His voice is so expressive and rich and captured completely the tone of the story and the characters.

The House of Silk is climbing up bestseller lists  - and with good reason.  Definitely recommended.

Listen to an excerpt of The House of Silk or read an excerpt.

Thank you for the review.

I'm so glad this is good - I gave it as a Christmas gift!

Kathy - I think it was a good pick - I can't see anyone not enjoying it!

I love Sherlock! If you're interested, there is a British show called Sherlock that is set in modern times. It's on Netflix at the moment. Each season is only 3 episodes long but take 1.5 hours. It is really entertaining. (I just found it a few days ago so I am still really excited about it).

Anonymous - too funny! I actually just borrowed series one from my library - I'm looking forward to watching it this week!