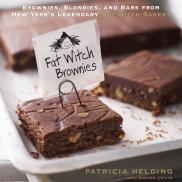 The latest book to catch my eye as it passed over my library counter and under my scanner was Fat Witch Brownies by Patricia Helding. First of all they look yummy, but Fat Witch? I've since discovered that they're an Oprah favourite thing.

From the publisher Rodale Books:

"Patricia Helding’s rich, intensely chocolatey Fat Witch brownie is a New York obsession, an internet sensation, and arguably the very best brownie to be found on the planet. Unlike other bakeries that feature a range of desserts, Fat Witch, launched by Helding in 1998, specializes only in brownies—baking and selling over 2,000 each day. In Fat Witch Brownies, Helding showcases for the first time her favorite spins on the classic chocolate brownie with creations like the Banana Bread Brownie and the Breakfast Brownie, and she expands her repertoire even further with recipes for other scrumptious bar-shaped confections.

With over 50 recipes that can be baked in the same 9 x 9-inch pan and require fewer than 10 ingredients, Helding shows that baking from scratch is neither expensive nor time-consuming. All of her recipes include ingredients from local grocery stores, and are ready to serve in one hour or less. Beginning with tips on the proper tools, timing, and techniques, continuing with five chapters of recipes, and finishing with fabulous frostings, Fat Witch Brownies allows you to explore the versatility and richness of brownies and bars and create the incredible desserts in your very own kitchen that have made Helding’s bakery famous."

50 brownie recipes? I need this. I've been craving chocolate lately.

Oh my gosh, this sounds fabulous!

This sounds like a great book...dangerous but great. :O)

My mouth is watering just thinking about it. Love that they are easy recipes with no difficult to find ingredients.