Review & Giveaway - Katie Up and Down the Hall - Glenn Plaskin 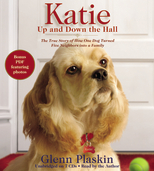 Animal tales seem to abound lately and here's another good one to add to the list - Katie Up and Down the Hall by Glenn Plaskin. The subtitle says it all - The True Story of How One Dog Turned Five Neighbours into a Family.

Plaskin lives in a high rise in Battery Park City in Manhattan. He works as a journalist, author and interviewer. He has tried having a dog as a pet before, but it wasn't a good fit. When he meets Katie, he know she is 'the one'.

What separates this book out from being just another I love my dog story' is the unique 'family' unit that created as a result of Katie's interaction with Plaskin's high rise neighbours. Pearl and Arthur are an older couple in their eighties. Childless,with not close family nearby, they too had had a cocker spaniel as a pet. Katie soon becomes the bond that unites Glenn, Pearl and Arthur. They become surrogate grandparents to Glenn, as well as Katie - looking after her through the day and when Glenn is away. Katie is also the catalyst for another relationship. Single dad John and his son Ryan end up moving into the same hallway and building as Glenn, Pearl and Arthur. Ryan and Katie become fast playmates, John and Glenn great friends and Pearl (grand) mothers them all.

I listened to this in audio format and was happy to see that the reader was the author himself. Plaskin has a calm, moderated tone of voice. Once in a while I did become irritated with the inflections he placed or the laughter he inserted - it seemed a bit canned and forced. While the beginning of the book does follow Glenn's professional life as it involves Katie going on some celebrity interviews, those aren't the chapters I enjoyed the most. Rather I enjoyed the day to day interaction of the hallway. Over the course of Katie's lifespan - almost 15 years, there were good times and bad, all dealt with as a family. Most notable was 9/11.

Without giving away the entire book, I applaud Plaskin - his dedication to his family is commendable. You can find "Katie" on Facebook and on Glenn on Twitter.

Thanks to The Hachette Book Group I have three audio book copies of Katie Up and Down the Hall to giveaway. Simply comment to be entered, please ensure I have a way to contact you, either through email or your blog. Open to US and Canada, no PO boxes please, one winner per address. Ends Sunday December 5th at 6 pm EST.

This looks great! Please enter me.

I've seen that trailer before and I dare anyone to watch it and not shed a tear. No need to enter me.

What an appealing cover! When I was a child I wanted a dog that looked just like Katie. And I love audio books. Thanks for the giveaway.
lcbrower40(at)gmail(dot)com

I love this trailer, it shows just how much love a dog can bring into your life and just how much they can change it for the better! This book truely sounds amazing and I'd love a chance to listen to the audio version. Thanks for the chance into this giveaway.

Thank you for the chance to win:)

I would love a chance to win this audiobook!
joannelong74 AT gmail DOT com

This sounds great for the family to listen to!

I love books about dogs! Please, enter me in the giveaway.
mom1248(at)att(dot)net

Love that trailer!! Thanks for the chance to win!

Oh my! I'm hooked. I have got to win this audio book! Please, enter me for a chance to win.

I have heard that this is really cute. Thank so much for the contest!
teagirl1 at telus dot net

I've been really into dog books, lately, and I've seen this a few times, now. It looks like a tear jerker for sure!

I absolutely love dog and cat books. Thanks for the giveaway.
Love & Hugs,
Pam
pk4290(at)comcast(dot)net

Pet lover here! Katie is a beauty and I'd enjoy reading about this family and Katie. Audio books are new to me, and I would like to win this one. I do jigsaw puzzles for relaxation, and listening to a story would be even more fun. Thanks for the giveaway and the chance to win Katie's story. I hope I win.

Sounds good to me. Please enter me.
thanks for making this available.
Mike

Just watched the trailer and all I can say is "awwwww......"! AND--I've got to read this book! A definite feel-good kind of book.

I love heartfelt, inspirational stories about animals who show people what life is all about just by being the adorable animal they are. Katie's story is wonderful and I'd love to listen to it!

Thank you for hosting a giveaway of the audio book!

Oh, I'd love to win this--it sounds so touching!

I have read the preveiw before I would love to have this book.

Please count me in, thanks.

Sounds like a tear-jerker but I'd love to listen to it. Please enter me, thanks.

I would love the chance to listen to this. Count me in, please!

Thanks! :0)
librarygrinch at gmail dot com

I would love to read Katie Up and Down the Hall :) *Thanks* for the giveaway!
http://scr.im/ladybugemail

I would love to hear this book.

I love anything about dogs and this book looks wonderful! Thank you.

Looks really cute! Please count me in. Thank you!

I have been wanting to read this, and an audio book copy is even better. I drive a lot and love to listen to audio books on the longer drives especially. Thanks for the chance to win! wgbc1446[at]yahoo[dot]com

Thanks for keeping this simple - we're taking a holiday road trip and this sounds perfect. Of course I might not win and it might not arrive before the holiday but that's OK as well.

This book caught my interest when I first saw it. It seems to be a heart warming story and one I would love to read. Thanks for the giveaway of this audiobook and the chance to win it. I hope I do!

It sounds like a heart warming cute story, just what I would love to read.
Diane Baum
esldiane@gmail.com

I love a good audio book

This sounds like a great book. I would love to read it. garrettsambo@aol.com

sounds wonderful, i would love to win
susansmoaks at gmail dot com

It sounds so sweet.