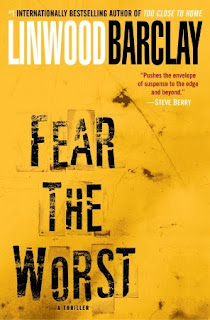 It's the kind of cover that grabs me, there's a Steve Berry blurb, but it's the new Linwood Barclay from Random House Canada and I don't need to be 'sold' on him - I just know I'm in for a fantastic, suspense filled read!

How could you not be hooked by the opening line?

"The morning of the day I lost her, my daughter asked me to scramble here some eggs."

Tim Blake is a divorced car salesman. He is thrilled that his teenage daughter Sydney will be living with him for the summer. She's working at a local hotel. Or so he thought....When Syd is late for supper one night, he decides to pick her up from work. It's the first time he's seen where she works. Or doesn't work.....No one at the hotel has ever heard of her. Where has she been going every day? Where is she now? Every parent's nightmare - she has vanished into thin air. While Tim is frantically searches for Syd, so are others....but not for the same reasons.

Barclay is back with yet another page turner in Fear the Worst, that kept me up all night, reading 'just one more chapter', until I fell asleep with the lights on.

The plot is full of twists and turns that you don't see coming. Lots of red herrings and an abrupt ending I didn't predict. Tim is an everyday guy thrust into a nightmare. He is likable, funny and believable as an anguished father. We get to know bits and pieces of Syd's life through her friends, mother and stepfather, but the driving question remains - where is Syd?

If you're looking for a fast paced, hugely entertaining thriller, this is the book for you. Actually Linwood Barclay is the author for you. Every one of this Canadian author's books have been winners for me!

*** Breaking news - you can read the first FIVE chapters of Fear the Worst on Shortcovers. Fair warning though - you'll be hooked! ***

I've been seeing this one around; i love Barclays books.

I can't figure out how I've missed this author's work since I love this type of book. Great review.

Oh sounds good! Will try to get it!

I haven't read anything by this author yet, but this book is sitting on my desk. It sounds like I'm going to enjoy it.

I have this one sitting around somewhere. Now I'll have to dig it out of the pile.