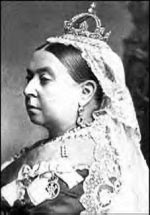 Or as it is formally known - Happy Victoria Day! Yes that is a picture of Queen Victoria on the left. And her birthday is a statutory holiday in Canada. Although we mark it as the beginning of summer!

"In Canada, the celebration of Victoria Day occurs every year on Monday, prior to May 25th. It is the official celebration in Canada of the birthdays of Queen Victoria and Queen Elizabeth II. Victoria Day was established as a holiday in Canada West (Now Ontario) in 1845, and became a national holiday in 1901. Before Victoria Day became a national holiday, people had celebrated Empire Day, beginning in the 1890s as Victoria approached her Diamond jubilee in 1897. Victoria, Queen of the United Kingdom of Great Britain and Ireland and empress of India was born on 24 May 1819. She ascended the throne after the death of her uncle King George IV in 1837 when she was only 18. She ruled for 63 years until her death in 1901 when her son Edward VII became King of England. "

Enjoy your day off everyone! I'm off to plant my veggie garden!

Luanne: I wanted to say thank you for stopping by my page and commenting on my post about Adwen. It helps me to know that there are others who understand where I am coming from. ***hugs*** have a great week!

According to "So, You Want to Be Canadian" by Kerry Colburn & Rob Sorensen, over the Victoria Day weekend, Canadians drink 150 million bottles of beer (Page 86).

I haven't had one yet this weekend. I don't feel like I'm doing my part for Canadian culture. Maybe there's still time. ;)

Happy Victoria Day! We don't celebrate it here but I wish I had the day off! :)

Ah well, next Monday for us!

Marie - Ah that sounds about right. When I was young, we used to go camping and imbibe. And freeze, because it would ususally rain!

Amy - my daughter lives in the States and just told me last night that it is Memorial Day next Monday.

Right back at you Luanne! I'm glad you have nice enough weather to plant. We have snow this morning and it's freezing cold in Alberta. Errrrrrrrrrrrrrrrrrrrrg-no summer yet, I'm not sure we've seen spring yet. lol.

Have yourself a great day off.

Dar - LOl! Snow~! Well we did have frost in low areas this morning so it will only be seeds. I've started tomoatoes and peppers inside, so they'll have to wait a bit longer.

Luanne,
Have a great day off. Hope you get lots of planting done!

Enjoy your holiday and Have a great week. :)

Thank you for explaining this one to us Yanks, lol. A worthwhile day, to be sure!

Yay! Happy May Two-Four! Haven't had any beer but I did play 4 hours of softball! :D

It was rainy today but still nice to have it off. Happy Victoria Day to you too!