The Alexander Cipher - Will Adams 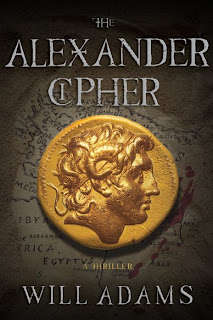 This is a genre I absolutely love - combining historical fact with fiction. Will Adams has admirably done both in The Alexander Cipher. This was Adam's debut novel - and the first in the Daniel Knox series.

Knox is an Egyptologist. His primary interest is in Alexander the Great. For years, historians and archaeologists have been trying to find the final resting place of this fabled leader. When an unexplored catacomb is uncovered during the building of a parking lot, it may hold some answers. There are many groups who want to be the ones to find Alexander. For a group bent on restoring Macedonia to it's former glory, they see this discovery as a catalyst to further their cause and will stop at nothing. For Daniel, it would be the find of his life, but will it be at the cost of his life?

The story cuts between seemingly disparate stories in the beginning, but all are connected to Alexander and his lost tomb. Adams gives us enough history to whet our curiosity, but not so much that your eyes glaze over. Many times I went and googled part of the story, fascinated with the history Adams presents. The undercurrents of greed, betrayal and manipulations are skillfully combined with history to produce a novel full of action, intrigue and adventure. The thrill of discovering the unknown is conveyed in his writing.

Read an excerpt of The Alexander Cipher from the Hachette Book Group.

Hi Princess Luanne, I've given you an award. Stop by for the logo when you get a chance. Have a great day!

I haven't gotten to read a book like this in a while. This one sounds great! Nice review Luanne.

Nice review! I read this a few weeks ago and have to get my review up. I liked it, but was sort of vaguely disappointed in it, I think I wanted to LOVE it. Still it was pretty good and worth the read!

Sounds good. In general, I really enjoy this type of book.

This sounds fantastic. I will keep my eye out for this one. Thanks for the review.

I'm really just starting to get into historical fiction, so this one really caught my eye.

I'm intrigued. This sounds like a book I'd really enjoy. Great review!