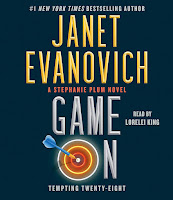 It was 1994 when Janet Evanovich released the first Stephanie Plum novel. Her latest Stephanie Plum tale is Game On: Tempting Twenty Eight.
I've missed a few along the way, but the Plum books are my choice for some escapist, light hearted listening that doesn't take itself serious at all. Familiarity is another draw for me - I know who, and what I'm going to find.
Stephanie Plum is a bail bondsman in 'the Burg' - her neighborhood in Trenton, New Jersey. Her partner is Lula - a big hearted former hooker.  Stephanie's love life is an ongoing storyline with many choices, but she seems to have finally decided on who she wants to be with in this latest. Stephanie's long suffering parents and her Grandma Mazur make appearances in every book as well. I must admit that Grandma is my favorite - I like her take on 'aging gracefully'. There's a plethora of supporting characters that have been fleshed out over the years. And the descriptor quirky could be applied to any and all.
Stephanie's latest fugitive is computer hacker, Oswald Wednesday. She's determined to bring him in and he's determined to shut her down - perhaps permanently. Oh, and there's another agent from Stephanie's past after Wednesday as well.
Fried chicken and doughnuts, car wrecks, murder (without the gore), silliness (The Mooner), temptation on the love life front, snappy dialogue and more populate the pages. As does friendship, family and community. Game On was exactly what I was looking for. And I can't pinpoint it, but Game On seemed 'fresher' to me than the last couple of book. It was exactly what I had hoped to hear!
I was happy to find that Lorelei King was again the reader. She's been the voice of this series for many years. The continuity is wonderful as it feels like jumping right back into life in the Burg. King has a very versatile and expressive voice. She has created different voices for the characters and it's quite easy to know who is speaking. The voice for Stephanie is pretty calm, no matter what's going on. Lula however is always big and loud. Grandma Mazur's has a perpetually happy voice, always seeing the bright side. Each of the love interest have distinct voices as well. Babe. There's many more and they all fit the mental images I've created for all the players. King speaks clearly, she is easy to understand and her pace of delivery is just right. She brings the action, emotions and calamities of the plot to life with her voice, changing up the tenor and tone to match what's going on. A great performance. Hear for yourself - listen to an audio excerpt of Game On.
Posted by Luanne at 9:00 AM

Has this really been running since 94!? I think this series fills the same space for you at Patterson's Alex Cross does for me. Reliable escapism at its finest!

Thanks, I wasn't aware of this new one out! I've read them all twice - with lots of laughs both times. She is the only author I can think of who is so consistently funny.

Thanks for stopping by Claudia. I hope you enjoy this one as well!