The Moth and the Mountain - Ed Caesar 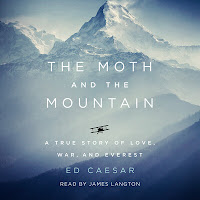 The best stories in life are those that are true... The Moth and the Mountain: A True Story of Love, War and Everest by Ed Caesar is one of those tales...
"An extraordinary true story about one man’s attempt to salve the wounds of war and save his own soul through an audacious adventure." In the 1930's, World War I British vet, Maurice Wilson decides he is going to "fly a plane from England to Everest, crash-land on its lower slopes, then become the first person to reach its summit - all utterly alone."
But there is much, much more to Wilson's story. Caesar does an amazing job, piecing together his life, not just the Everest idea. I was fascinated by Wilson, who seemed determined to squeeze out every last moment of living each and every day. That's not to say every day was butterflies and sunshine. There are definitely wounds to his psyche. But Wilson's determination and his strength of mind and body was simply phenomenal. As was his ability to figure out a way to get around the obstacles put in his path, without ever doubting he could.
Caesar explores all of Wilson's - from his home and family, to the war, his wanderings, his marriages and more. Much of this is gleaned from letters and journals of Wilson's that have survived. I liked Caesar's writing style and presentation. Wilson became a person and not just a subject. I'll be looking at some of Caesar's other published items.
I chose to listen to The Moth and the Mountain. The reader was James Langton and he did a great job. He has a British accent which was perfect for both the subject and the writer of this book. His voice was clear and easy to understand. He interpreted the book well, conveying the emotion, action and more with his reading. He has a very expressive voice. I've said it before and I'll say it again - I become much more immersed in a book when I listen to it. The Moth and the Mountain was a fabulous listen - the story of a man who truly lived life. Hear for yourself - listen to an excerpt of The Moth and the Mountain.
Posted by Luanne at 9:00 AM