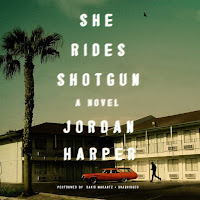 Polly McClusky is eleven years old. She hasn't seen much of her father Nate in the past few years as he's been in prison. But when he shows up outside her school, she willingly goes with him. You see, there's a contract on both their heads....and Polly's mother has already been killed.

Polly and Nate are on the run, trying to stay one step ahead of those determined to wipe them out. Polly is an innocent, but that has to change. Nate needs to teach her skills - skills an eleven year old shouldn't need. An eleven year old he barely knows. But one that has 'gunfighter eyes' just like her father......

Whew! What a great premise. The danger, the action and the unknown direction the story was going to go immediately drew me in. But, it was also about the relationship between a father and daughter and Nate's unwavering desire to protect he at all costs. The reader cannot help but be firmly behind Nate and Polly as they run - and then fight back. Harper does a fantastic job manipulating the reader's emotions. Both characters were well drawn and I had no problem imagining what they looked like. The inclusion of Polly's stuffed bear as an extension of her personality and thoughts was a great device. With each new twist and turn in their lives, I became even more invested in the outcome - and the ride there.

I chose to listen to She Rides Shotgun - and I'm so glad I did. I'm sure it's just as good a read on the printed page, but for me, it was even better listening. I was sucked into the story and found it so hard to stop and climb out. David Marantz was the reader. I thought his voice interpreted Harper's work well. The tone and timbre he uses for Holly conveys her innocence. The gravelly tone for Nate drew a vivid mental image for me. He captures the danger and action of the book. His voice is easy to listen to and is very clear. Listen to an excerpt of She Rides Shotgun. Or if you prefer read an excerpt.

A caution to those who are adverse to violence. Those looking for a helluva a good tale? This one's for you. She Rides Shotgun has movie written all over it. I am now a devoted Jordan Harper fan - more please. You can connect with Jordan Harper on Facebook and follow him on Twitter.
Posted by Luanne at 7:00 AM