Giveaway - Disney's The Jungle Book on Blu-ray and DVD! 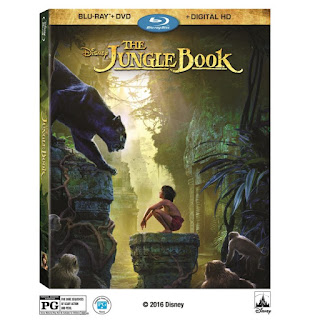 The Jungle Book was one of my favourite storybooks as a child. It's hard to believe it was published in 1893! Walt Disney produced an animated film of The Jungle Book in 1967.

And now, in 2016, Jon Favreau has reimagined that classic with stunning live-action in Disney's The Jungle Book!  The Digital HD and Disney Movies Anywhere releases on August 23, and the Blu-ray Combo Pack, DVD and On-Demand on August 30.

And, I have a Blu-ray Combo pack to giveaway to one lucky reader, courtesy of Disney Home Entertainment!!

For those who haven't read the stories  here's a quick synopsis of the movie: "In an epic adventure, Mowgli, a man-cub raised in the jungle by a family of wolves, is forced to abandon his home when fearsome tiger Shere Khan promises to eliminate him. Guided by stern Bagheera and free-spirited Baloo, Mowgli embarks on a captivating journey of self-discovery."

The all-star cast includes Bill Murray (“Lost in Translation”) as the voice of Baloo, Sir Ben Kingsley (“Learning to Drive,” “The Walk”) as Bagheera and Lupita Nyong’o (“12 Years a Slave,” “Star Wars: The Force Awakens”) as the voice of mother wolf Raksha. Scarlett Johansson (“Avengers: Age of Ultron”) gives life to Kaa, Giancarlo Esposito (“Breaking Bad”) provides the voice of alpha-male wolf Akela, Idris Elba (“Beast of No Nation”) roars as the voice of Shere Khan, and Christopher Walken (“The Deer Hunter”) lends his iconic voice to King Louie.


And if you'd like to own a copy of The Jungle Book, enter to win a copy using the Rafflecopter form below. Open to US only. Ends September 10/2016.
a Rafflecopter giveaway
Posted by Luanne at 7:00 AM

I missed this at the theater so I appreciate the giveaway of this movie based on the book by Rudyard Kipling.

Rudyard Kipling. You can download a free copy of the book off Amazon, at least you used to be able to.

Rudyard Kipling wrote this. The animatronics in this movie are amazing - they are so lifelike.

Rudyard Kipling wrote this delightful story. Wonderful as a book and in all it's video versions. Thanks for the giveaway.

The answer would be Rudyard Kipling

The Jungle Book (1894) is a collection of stories by English author Rudyard Kipling! I have always LOVED the Jungle Book!