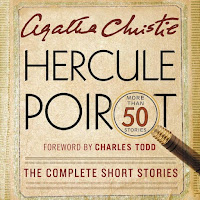 Agatha Christie was truly the Queen of Crime. Her books and stories have been enjoyed around the world.

But I have to say, my absolute favorite recurring character of hers, is Hercule Poirot. I love his style, mannerisms, dialogue, idiosyncrasies - and those "little gray cells" that drive the investigations. I always have enjoyed the deductions, the piecing together, the reasoning, the seemingly innocuous clue tucked into a sentence somewhere along the way. Christie was a clever, clever writer.

Now I'm not much of a short story reader. But! When I saw that Harper Audio had released Hercule Poirot: The Complete Short Stories, an audiobook of 50+ Poirot stories, I knew I wanted to listen. There's 35 hours of listening just waiting for you! Most are just 30ish minutes long, but there are some longer novellas as well. The length of the short stories were perfect - eating lunch, waiting rooms, while crafting and those nights when I can't sleep. There's much satisfaction in having a case presented and solved in thirty minutes. There were some familiar cases and some I'd never read. But each and every one was a treasure.

Now, the real reason I wanted to listen - David Suchet is one of the readers! There have been many actors that have portrayed Poirot, but he is the best in my opinion. Suchet portrayed Poirot for twenty five years! Hearing his voice immediately evoked a strong mental image of the character. And knowing the voice drew me right into the stories. Suchet brings Poirot to life with his voice. He captures Christie's work easily, changing the tone, tenor and emphasis as the plot progresses. Now, as excited as I was about Suchet, I was just as excited to find that Hugh Fraser was also a narrator. Fraser played Captain Arthur Hasting, Poirot's sidekick. Again, a familiar voice was like settling in with old friends to hear a tale. Nigel Hawthorne and Isla Blair rounded out the cast. Excellent performances all round. Hear for yourself - listen to an excerpt of Hercule Poirot: The Complete Short Stories.

I love Hercule Poirot so much. Agatha Christie was such a ground breaking author and I love that she is still being read today

I agree Tee. I'm happy reading them again and again!

I enjoy listening to audiobooks before falling asleep + on long car/bus rides. I’m leaving for Qué next weekend and this would be perfect to listen to on the way up.
Cheers & happy listening!

There's 35 hours of listening there Icewineanne - you'd not run out!