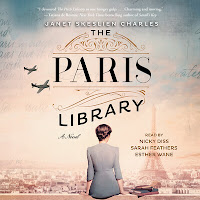 I kept hearing and reading wonderful reviews of  Janet Skeslien Charles' new novel, The Paris Library, and knew it was one I wanted to listen to.
There's a real surge in wartime historical fiction, especially WWII. The Paris Library is that, but it's a little bit more as well. The Paris Library is also based on fact.
"...the incredible true story of the librarians who stood up to the Nazi “Book Protector..."
Janet Skeslien Charles actually worked at The American Library in Paris. The details, settings and atmosphere benefit from that first hand knowledge. I could imagine the smell of the library, the feel of a book, the taste of a café au lait, the cobbled lanes and so much more.
Charles tells her story in an absolutely perfect back and forth, past and present narrative. The bridging character is Odile, a young librarian at The American Library in 1939 and a reclusive neighbor of young Lily in 1983 Montana. The two end up bonding over their love of books and language. As a devoted reader, I loved the references to the Dewey decimal system, the turn of a phrase, choosing a book, the joy of the written word, getting lost in a tale and and so much more.
The Paris Library is a love letter to libraries and books, but it's also a story of love lost, love found and love betrayed. Romantic, familial and friendship. And betrayal, also on so many levels.
As present day readers, we are aware of history and know what is going to happen. Charles does such a great job, bringing the past to life as Odile, her family and counterparts live through this horrific time. But it is done from such a unique and more personal perspective. Charles has included actual staff of The American Library as characters in The Paris Library. Their lives are truly remarkable.
The story in 1983 Montana is just as well written. Charles has also lived in Montana, and the place and time also benefits from that personal knowledge. Lily is also an engaging character. Her story too is a tale of relationships, with love and loss on the table.
I chose to listen to The Paris Library. A cast of three brought this book to life. I was happy to have multiple readers - Nicky Diss, Sarah Feather and Esther Wane. I'm not sure who did what part, but they were all very good. The voice for Odile in France was perfect - the accent rang true and was believable. The accent stayed with her as she spoke English as well. Other characters from the Paris setting were just as well done with each character being easily identifiable. The emotion was translated from the written word to the spoken and for me, this brought the book to life. That also goes of for the voice of young Lily - believable as a teenager and capturing the ups and downs of her life. All voices were clear, easy to understand and pleasant to listen to. I've said it before and I'll say it again - I find listening to a book immerses me in a novel. This was very much the case with The Paris Library. The cast has done an admirable job. And I enjoyed the notes from the author as well.
An easy five star listen. Hear for yourself - listen to an excerpt of The Paris Library.
Posted by Luanne at 9:00 AM

I can totally see myself enjoying this lovely book. I have an affinity to libraries and bookstores in a novel, so yes, please. The historical significance is also a bonus.

Thank you Joyousreads! I hope you're able to get a copy to listen or read!