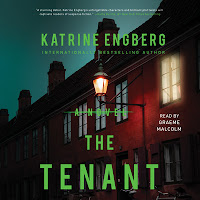 Are you a Scandi mystery fan? Yes? Then you're going to want to pick up Danish author Katrine Engberg's debut novel, The Tenant, just released in the US.

A young woman is found murdered in her apartment with curious cuts on her face. Her landlady Esther, who also lives in the building, is a budding novelist. And her work in progress just happens to have a murder that is eerily similar to the tenant's death. Is she a murderer? Or is one of her numerous friends a killer? Could someone be targeting her for another reason?

On the case is the police detective duo of Anette and Jeppe. This pair are a large part of my enjoyment of The Tenant. They play well off each other with very different personalities. I found myself a bit more drawn towards Jeppe, as he fights his way back from some hard circumstances. The banter between the two is entertaining. And their sleuthing skills are sharp. I would read another book featuring these two leads.

I thought things were headed one way, but Engberg keeps the reader guessing with additional bodies and further revelations. There was no way to predict the last 'ta-da'. I did find it a wee bit of a stretch by the final pages.

Engberg fleshes out her characters well, not just the leads, but the other players as well, making them more believable and this allows them bring more to the story. The pacing is measured in The Tenant, taking a more circuitous route to the final whodunit. I enjoyed the journey!

I chose to listen to The Tenant, based on who the narrator was - Graeme Malcolm - one of my all time favorites. He has such a rich, sonorous voice that is a real pleasure to listen to. It grabs and holds the listener's attention. It has a nice gravelly undertone as well. His inflection and tone capture and interpret both characters and plot extremely well. Listen for yourself - here's an audio excerpt of The Tenant.
Posted by Luanne at 7:00 AM

Thanks for the review - I do enjoy the Scandi mysteries and this sounds like a good one to put on the TBR stack.

This one sounds terrific Luanne. I put a hold on it right after reading your glowing review!
Cheers :-)

I hope you all enjoy it!