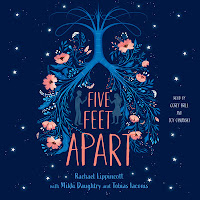 Okay, so lets start off with the cover of Five Feet Apart by Rachael Lippincott  with Mikki Daughtry & Tobias Iaconis. It's beautiful and really captures the premise of the book.

The star-crossed background. Uh huh, love is in the air. The vines or roots - think of them as lungs. And the title as the distance that has to be kept between the two main characters - Will and Stella.

Will and Stella both have cystic fibrosis. They're in hospital for treatment - Stella is on the transplant list and Will is on a trial drug battling a severe infection. They meet and it's most definitely not love at first sight, not even like really. Which is okay, as they need to maintain a six foot distance from each other, so as not to further compromise their health. But, this is a love story......and five feet is closer than six...

I adored Stella! She's smart, funny, kind, determined and more. Will is a bit of a 'bad boy'. He's angry at his disease and regularly refuses to do the treatments that will help him. He would much rather visit the places he's read about while he still can. Stella's best friend Poe will break your heart. Nurse Barb is the strict one that enforces that six foot barrier.

I thought the cystic fibrosis premise was done well and I'm sure readers and listeners will learn more about this disease through this novel.

The attraction between the two is inevitable. And the path is rocky of course. Exactly what I had expected going in - a love story. Do things happen quickly? Yes. Are there plot points that are a bit of stretch? Yes. Did I enjoy the story? Absolutely yes! (And if you're a John Green fan, you're going to love Five Feet Apart.)

I chose to listen to Five Feet Apart. The readers were Joy Osmanski (a perennial favorite of mine) and Corey Brill. Osmanski's voice matches the mental image I had created of Stella. Her voice sounds like a teenager. The tone and diction is crisp and clean. She captures the story well and matches the emotion and tenor of the story. Brill's voice has a nice, gravelly undertone to it. The pace of his reading is measured. He too enunciates well and his voice is pleasant to listen to. His voice also matched the character.

I really enjoy audiobooks - the stories seem to come to life for me when I listen. And Five Feet Apart was no exception. Excellent! Listen to an excerpt of Five Feet Apart.

Five Feet Apart releases as a film in March 2019, starring Cole Sprouse and Haley Lu Richardson.
Posted by Luanne at 7:00 AM

I'm getting a lot of Fault in Our Stars vibes from the summary. It sounds like a great listen!

Bermudaonion and Ethan - yes, a lot of John Green feel to it...