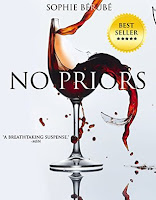 No Priors is Sophie Bérubé's debut novel. Originally published in French in Canada under the title Sans Antécédents in 2011, it has been recently released in English.

Thomas is a bookseller who can 'read' his customers. He just seems to know what books they will like and how to make them all feel 'special'. When a lawyer named Roxanne walks into the bookstore, Thomas is surprised to find himself attracted to her - more than he imagined. The attraction is mutual and a relationship begins....

The reader is privy to that relationship - the ups and downs, ins and outs, the arguments and make ups and more. Bérubé pulls no punches in depicting a dark and troubling union.

But, No Priors is a 'he said, she said' story that will have you wondering who is telling the truth. The first half of the book is Thomas's view of the relationship and the second half is Roxanne's viewpoint. I must admit - I was fooled. I believed one over the other and was proven wrong. Bérubé does a great job of depicting Narcissistic Personality Disorder. Many of the scenes were disturbing, albeit believable. Both characters are 'damaged' and their willingness to stay in such a dysfunctional relationship is sad and hard to read.

As someone who rarely reads a book twice, I did find myself becoming a wee bit bored re-reading of the same events a second time. It was like reading about the same event but with a different ending each time. But, it is those opposite endings and differing views that will have you questioning who is telling the truth. Or is there a truth?  Bérubé's depiction of this toxic relationship seems scarily accurate.....Read an excerpt of No Priors.
Posted by Luanne at 7:00 AM

This sounds interesting but I cannot see myself "rereading" the story twice, so good to know, thanks :)