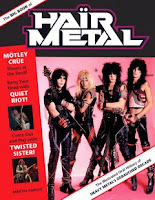 What books caught my eye this week as they passed over the library counter and under my scanner? Rock stars this week.......

First up is The Big Book of Hair Metal by Martin Popoff.

From the publisher, Voyageur Press:

"In the 1980s, heavy metal went mainstream. The dark themes and brain-busting riffage of bands like Black Sabbath and Deep Purple suddenly fell out of favor--replaced by a new legion of metalheads whose themes of girls, partying, girls, drugs, and girls were presented amid shredding solos and power ballads and who were, for some reason, more acceptable to the masses. In this ultimate guide to the subgenre, acclaimed heavy-metal journalist Martin Popoff examines hair metal in an all-encompassing oral history jacked up by a kaleidoscope of outrageous and previously unpublished quotes, anecdotes, photos, and memorabilia. T Here it is in all of its primped-up glory."

And next we have The Rockstar Remedy: A Rock and Roll Doctor's Prescription for Living a Long, Healthy Life by Dr. Gabrielle Francis.

From the publisher, Harper Wave:

"hen we think of rock stars, we tend to think of extreme living: the infamous trinity of sex, drugs, and rock & roll. But the truth is, those myths are sexier than the facts. The best-kept secret of the music industry is that the majority of our rock & roll idols are committed to health—even when they party like, well, rock stars.

As a holistic physician and massage therapist to many of the music world's elite, Dr. Gabrielle Francis knows this truth firsthand. Over the course of her career, she has helped some of the biggest names in the music industry look and feel great, despite an exhausting lifestyle that both demands discipline and welcomes overindulgence. In The Rockstar Remedy, she shares the program that has helped these stars repair, recover, and refuel so that they can perform at their best.

In many ways, the health obstacles facing Dr. Francis's most famous clients are the same as those facing her everyday patients. Being overscheduled, sleep deprived, on the road, or occasionally eating or drinking to excess aren't lifestyle habits unique to the music industry—they are the same challenges we encounter all the time.

With exclusive interviews from artists such as Steven Tyler, Dave Navarro, Tommy Lee, Eve, and members of Megadeth, Def Leppard, Anthrax, and many more, The Rockstar Remedy offers an accessible, fun, and effective plan for staying healthy and happy in the chaos of our daily lives.