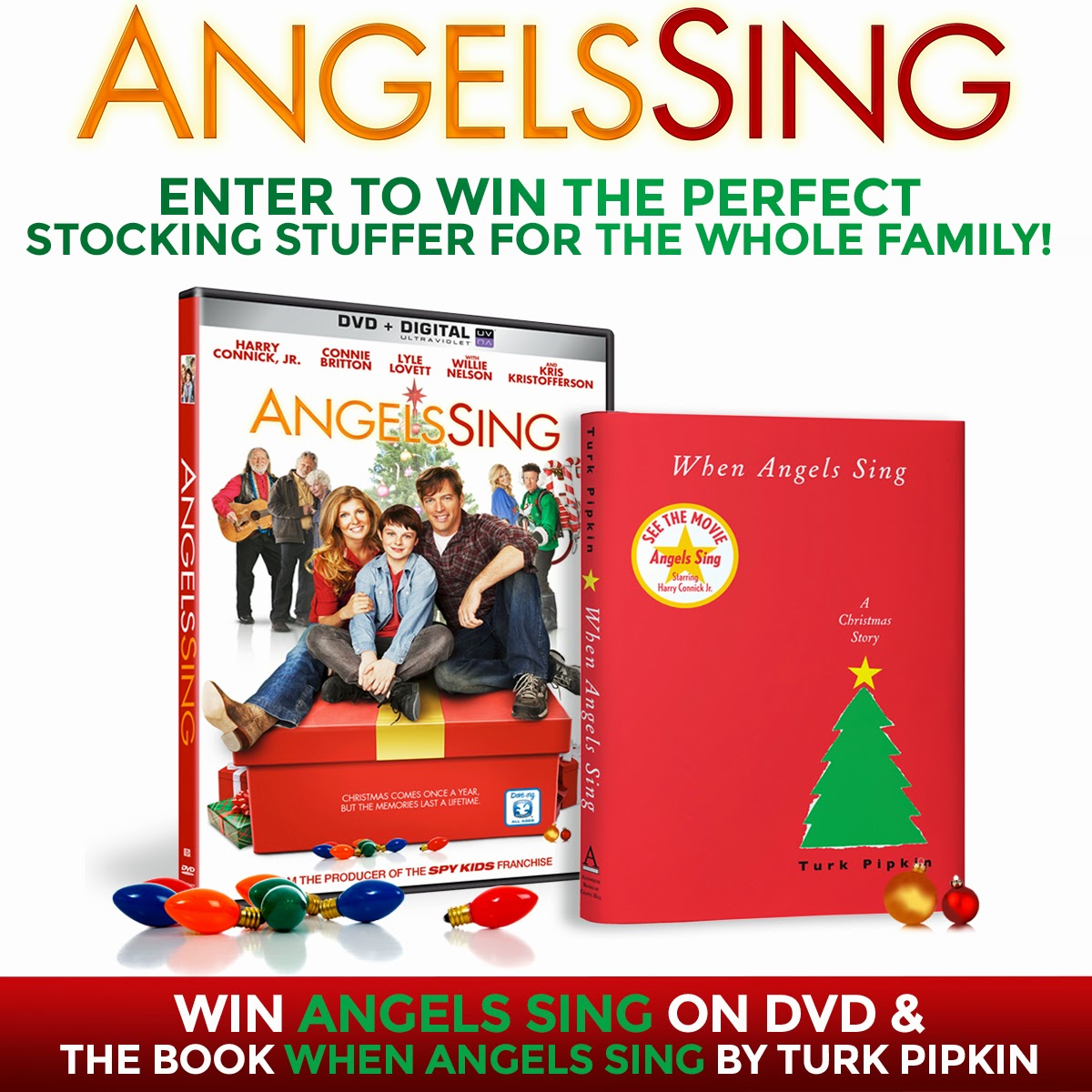 Do I have the perfect holiday giveaway for you today!!

I adore Christmas movies. (Feel good movies at this time of the year are the best!) I'm really looking forward to sitting by my tree to watch Angels Sing!

"Harry Connick, Jr. stars as Michael Walker, who, as a child, wished every day was Christmas. That is, until a tragic accident crushed his holiday spirit. Thirty years later, Michael still can’t muster any joy for Christmas, despite encouragement from his playful wife (Connie Britton) and well intentioned parents (Kris Kristofferson and Fionnula Flanagan). But when his young son (Chandler Canterbury) faces a tragedy, Michael needs to make amends with his past. A mysterious man named Nick (Willie Nelson) gives Michael a gift that instills in him the courage to find the Christmas joy that he lost." Perfect holiday viewing! Watch for my review!

Angels Sing is based on the book, When Angels Sing, by Turk Pipkin.

"Writer and actor Turk Pipkin has had a career like no other. A former stand-up comedian who gave Read an excerpt of When Angels Sing. 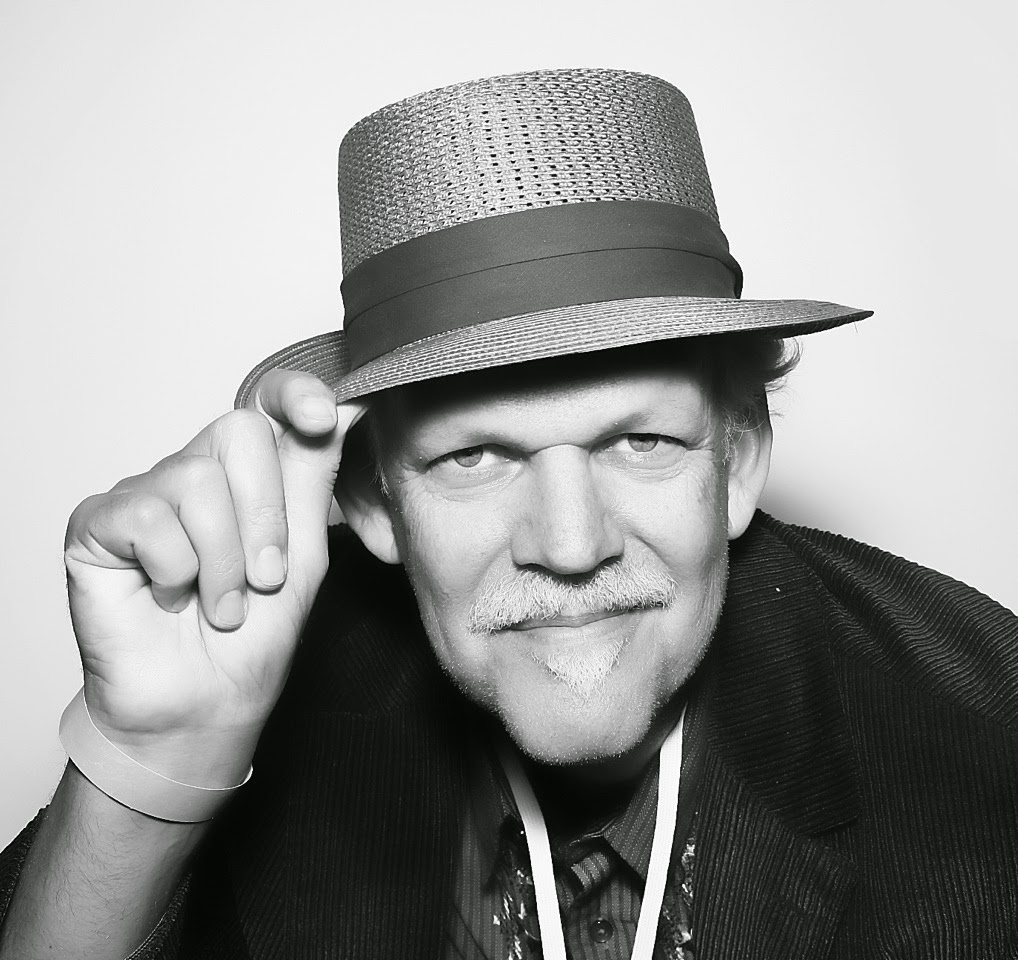 up performing after a long run on the road with Rodney Dangerfield and many others, he's since published eight books, including two well-received novels, and written a hundred hours of primetime television. He's also traveled around the world for thirty years, writing as he journeyed for a dozen national magazines. In his latest incarnation, Turk can be seen as a recurring character in the third season of HBO's hit series, "The Sopranos."

Here's a quick Q and A with Turk Pipkin!

1. You're a man who has worn many hats - author, actor, comedian, director and activist. And you've met many people in those roles. Who has left their mark on you or impacted your life the most?

---I owe so much to so many, it's hard to choose who's influenced me the most. It's hard to top Desmond Tutu telling me, "The sea is made of drops of water. What you do, where you are, is of significance." Even so, I think Willie Nelson has taught me more than anyone else - in how to respect family, friends and those in need, in being open every day to the possibilities of Love, and in how to make conscious decisions in the way you live your life. In One Peace at a Time, a feature documentary I directed for The Nobelity Project, Willie told me, "The answer is there if you look for it. You know what to do. Right and wrong is not that hard. It’s what you choose to do."

2. Angels Sing is a great movies for families to watch at Christmas. What do you love most about Christmas?

---The thing I like most about Christmas is probably the same as almost everyone else - the way it brings families together; the way it ties them together across generations. That's the core message contained in Angels Sing, and also in my novel that it's based on, When Angels Sing.

3. How can readers support the Nobelity Project?

---The Nobelity Project has made three feature films and fifty short films about global problems and solutions. These are hopeful films about a better way, and I love it when new people find them at www.nobelity.org, on our youtube channel, or any other way. We often have specific fundraising projects for a particular school in Kenya, for tree-planting in the States or for our library and bookmobile project in Honduras, but the engagement almost always comes through our films and photos. So a great place to start is to join the mailing list and like us on Facebook.

4. What's next for Turk Pipkin?

---We built 50 classrooms, libraries and water projects in Kenya last year. We'll do more this year and that works keeps me fairly busy with community engagement, contracting the construction work and reporting on it all. Outside of the Nobelity Project, I'm still writing books and screenplays, doing my best to tell stories that I love, and that I think will have some meaning and some entertainment factor. It's nice when you end up with a movie with Willie Nelson, Connie Britton and Harry Connick, Jr., but you have to remember, it all starts with the story.


Sound like a DVD and book you'd like to enjoy?! Simply leave a comment to be entered. One randomly chosen winner will win a copy of the DVD and book! Open to US and Canada, one entry per person. Ends Dec 21/14.

I've never seen this movie but it sounds very interesting. Thanks for the giveaway. BWallace1980(at)hotmail(d0t)com

A movie which interests me greatly. thanks for this lovely giveaway. elliotbencan(at)hotmail(dot)com

My mom would like this movie. Thanks for the giveaway!

Love Harry Connick Jr - and look at the rest of the cast! The DVD and book would be a terrific Christmas gift for this greatgrandmother!
kpbarnett1941[at]aol.com

This is a good movie - would love to read the book too.
sallycootie@gmail.com

I would love to win this one, some of my favorite actors in this one. Of course, I'd like to read the book! Thanks for the giveaway.

Wow, I had no idea that Turk Pipkin is so talented. He is truly blessed. Would love to read his book & see the film.
Thanks for the interview & for bringing this to my attention Luanne...........and of course for the opportuntity to possibly win a copy of both :-)

Would love to see this. You can never see too many heart warming movies!

We love watching feel good Christmas movies as a family.

I do enjoy stories that leave you with a happy feeling.
mce1011 AT aol DOT com