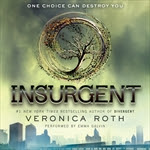 In a continuing effort to indulge my secret passion for YA dystopian fiction, I happily picked up Insurgent - the second (and highly, highly anticipated) volume in Veronica Roth's trilogy.

I've had many patrons in the library looking for their next read after finishing the Hunger Games trilogy - and I have been heartily recommending the first book - Divergent.

Just to play catch up here's the premise of Divergent -  Chicago in some dystopian future. Society has divided itself into five factions: the honest, the selfless, the brave, the peaceful and the intelligent. On their birthday, sixteen year olds must pick the faction they will live with for the rest of their lives. It can be the one they were born into...or the one they feel they should belong to. One or the other, but not more than one. For most citizens, it's an easy choice. But for Beatrice, the choice is a difficult one - her test scores indicate she could easily belong to more than one faction - she is divergent and it's a dangerous thing to be.

We were left hanging at the end of Divergent, wondering what Tris and her faction would do now. Insurgent literally picks up from that last page. In fact, you really wouldn't want to read Insurgent without having read the first book - you would be lost as to who's who and what is going on.

That being said, I really had no idea where Roth was going to take her characters. She truly kept me guessing, entertaining me until the very last page. In the first book Roth did a fantastic job of world building - the future society she has envisioned was brought to life with lots of detail. (and was quite thought provoking actually) Many characters were introduced, but are explored further in Insurgent, now that the stage has been set. Tris herself must take the time to deal with her grief and try to understand her role in this uncertain world that is poised on the brink of great change.

And being a YA novel, of course there is the requisite love push/pull angst. Tris' relationship with Four (more commonly known as Tobias in this book) didn't capture me quite as much as it did in the first book. There's a few too many 'misreads' of actions and words. (But I have to remind myself - they are teens)

I mostly choose to listen to my YA fiction. Emma Galvin is the reader for this series and I don't think they could have chosen anyone better. Her voice is slightly gravelly and rough - exactly like I thought Tris would sound. She captures the action and emotions of the characters really well - her voice is quite expressive. In fact, Galvin won awards for her Divergent performance. See for yourself - listen to an excerpt of Insurgent.

Chaos, danger, friendship, betrayal, choices, loss, romance - Insurgent has it all. For great escapist, entertainment reading, the Divergent books are perfect. Be warned - there is a fair amount of violence. The last page of Insurgent ends in the same dramatic fashion as Divergent - with a cliffhanger. Unfortunately, book three is not due until Fall 2013...far too far away.....

This one's getting rave reviews. I'm just not sure it's for me.

I really liked this novel. But not as much as Divergent. Like you I was a little annoyed some times by Tris and Four's relationship (which I loved in the first book). Here's hoping they can work out some of their stubbornness and bad tempers next book!