Step Back from the Baggage Claim - Jason Barger 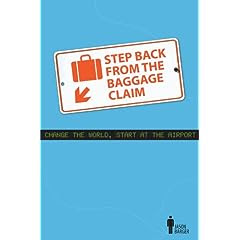 When Jason Barger contacted me about reviewing his new book, Step Back From the Baggage Claim, it seemed it was just meant to be. I was flying to visit my daughter and was connecting in Chicago's O'Hare airport and I'm a very nervous flyer at the best of times.

A book about airports and changing the world? Exactly. What Barger did was spend 7 days in 7 major airports in the US, never leaving the terminals, 6548 miles and 10,0000 minutes of observation.

"Every day, airports and airplanes are cities with cities, microcosms of much of American culture and behaviour." " The airport experience is the perfect metaphor for daily life in or world - so many different people going different directions with different agendas."

Using airplane experiences and language, such as the baggage claim, security, the 'ding' , the SkyMall magazine and more, Barger neatly ties into behaviors and changes that would enrich and benefit not just an individual, but the broader populace as well.

Stepping back, gaining perspective, slowing down, choosing to live fully in each moment and being available to others can make a difference according to Barger.

Unconciously, I did utilize a lot of the above on my trip. I walk much more slowly than others at times. On the long, long trip to the first checkpoint at Chicago, even the crew passed me on the way in. Knowing that I had three hours to make my connection and trying to stay calm, I took the time to enjoy the stained glass exhibit on the walls on the way in. And when I finally arrived? My planemates were still waiting in line. When I thought I was completely in the wrong line up at the next area, I turned to the man behind me and asked my question. He blanked me altogether. But the heavily tattooed backpacker behind him jumped in and pointed me the right way with a huge smile. A small kindness, but much appreciated. I was able to somewhat pass that on when I headed back home. I ended up sitting beside a young woman on her first flight. We had a great chat and kept both our minds off the lift off.

The title of the book comes from the great rush up to the baggage claim area. Barger theorizes that if everyone stepped back three paces so everyone could see and stepped forward when you saw your own bag, it would be much easier for everyone. I agree!

His story has been picked up by the New York Times, ABC News.com, National Geographic Traveler and many others.

Do I think it will catch on? I don't honestly know - it would be nice if it did. The world needs idealists like Barger. I left my book in Chicago and hope that someone else will enjoy it and take something from it. I personally believe in slowing it all down and living each moment more fully. And as Jason says, "Travel gracefully."

I really like the sound of this book and enjoyed hearing your own personal experience and how it relates. I also love the idea of you leaving the book in Chicago for someone else to benefit from! A bit of a "pay it forward"

This sounds neat, though I'm not much of a flier. I flew earlier this year for the first time in about 10 years, and I was very anxious so I did my best to stay calm. I did a lot of quiet observing and I shouldn't have been surprised by all the rude people in a rush, but I was.

Wasn't it a great book? I really enjoyed it too and Jason was an absolute pleasure to work with.

I love the concept of this book because I would love to slow my life down. I'm not sure why we're always rushing everywhere.

This one sounds like something I should read before my travels at Christmas. I already do the slow walking thing, though. It doesn't do much for peace of mind when that's just how fast you can go.