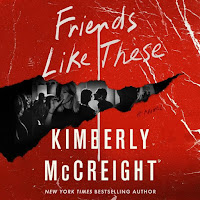 Kimberly McCreight's latest book is Friends Like These.
"Everyone has those friends. Doesn’t matter how long it’s been, or how badly they’ve occasionally behaved, or how late it is when that call finally comes—you show up. No questions asked."
Oh, there's so many avenues McCreight could take us with a premise like that! Five college friends reunite ten years after they graduated. Secrets, lies, complicated relationships - and a dead friend are part of the past that keeps this group of friends bound to each other.
Well, it was very easy to not like any of group. They're all hiding something, they all lie and despite their seeming love for each other, they all have their own agendas. The only character I really liked was the police detective.
I found the plot to be a bit confusing at times as the narrative jumped timelines - and there were many timelines. Past, present, and times within the present - days and weeks. For this listener it was just too much, too many, too convoluted. The ending did however, provide a really good twist.
One reason I was excited to listen to Friends Like These was the use of multiple readers for this title. Eight to be exact - Carlotta Brentan, Ewan Chung, Susan Dalian, Lauren Fortgang, James Fouhey, Stacey Glemboski, Joe Knezevich and Alex McKenna. I can't tell you who played what role, but their voices all suited the characters they were portraying. The standout for me was the police detective - she has a cigarette and whiskey rasp to her voice that really worked for the role. A few voices did seem somewhat similar, so I had to listen to the name given at the top of each chapter to confirm who was taking center stage. I think all the reader's performances were very good. But for this listener, having so many narrators just exacerbated the 'too much' feeling of the timelines and plotting. Hear for yourself - listen to an excerpt of Friends Like These.
I've read and enjoyed previous books by McCreight, but this one ended up being just okay. Three stars.
Posted by Luanne at 9:00 AM

Hmmm....wonder if you'd have liked this one better in print. I do understand about liking the various narrators, but also finding them a little 'too much'. I'm on the hold list for this book in print. We'll see how it goes. It will be a while before my 'number' comes up. LOL

You know, I think I might have enjoyed the print version in this case. I look forward to your thoughts!

I definitely like when a book that features so many perspectives is narrated by different people. It helps me keep the different threads straight. Sorry the plot itself never really came together.

Yes, that's why I like multiple readers Ethan. I just wasn't sold on the plot thought.