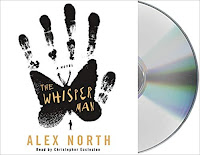 What? Well, time flies and sometimes I just seem to run out of it! So, Short and Sweet will be just that - some brief thoughts on books I've read or listened to. And when you see S and S, chances are I'm either busy, tired or on vacation!

I was hearing good things about Alex North's latest book, The Whisper Man, and decided to make it my latest back and forth to work listen. Narrated by Christopher Eccleston.

"In this psychological thriller, Alex North weaves a multi-generational tale of suspense, as a father and son are caught in the crosshairs of an investigation to catch a serial killer preying on a small town.

After the sudden death of his wife, Tom Kennedy believes a fresh start will help him and his young son Jake heal. A new beginning, a new house, a new town. Featherbank.

But the town has a dark past. Twenty years ago, a serial killer abducted and murdered five residents. Until Frank Carter was finally caught, he was nicknamed "The Whisper Man," for he would lure his victims out by whispering at their windows at night.

Just as Tom and Jake settle into their new home, a young boy vanishes. His disappearance bears an unnerving resemblance to Frank Carter's crimes, reigniting old rumors that he preyed with an accomplice. Now, detectives Amanda Beck and Pete Willis must find the boy before it is too late, even if that means Pete has to revisit his great foe in prison: The Whisper Man.

And then Jake begins acting strangely. He hears a whispering at his window..."

Oh, what a great, creepy premise. Is the house haunted? Is Jake seeing things that are only in his head? Or are they real? Is there a killer about? The listener is never quite sure. North does a great job of keeping us guessing as the book progresses. North introduces events into the narrative that changed my thinking as it built momentum. The whodunit was one I didn't seen coming - and I always appreciate that. But for this listener, it was all about the journey and the uncertainty. Great listen!

And here's a fun fact: "The Whisper Man was inspired by North's own little boy, who mentioned one day that he was playing with "the boy in the floor."

Christopher Eccleston does a fantastic job or narrating. He has such a rich, sonorous, expressive voice - it's wonderful to listen to. He does a great job catching the tone of the book with his voice. And his reading of The Whisper Man rhyme gave me goosebumps. Listen to an excerpt of The Whisper Man.
Posted by Luanne at 7:00 AM

This book was amazing. I loved it!

It was, wasn't it Dianna? The creepy factor mixed with mystery was so good!