The Care and Management of Lies - Jacqueline Winspear

I had no idea until I turned the first few pages that Jacqueline Winspear's newest book, The Care and Management of Lies, was not an entry in the Maisie Dobbs series. Not that it mattered - I knew I would enjoy whatever story Winspear had written.

The author's notes at the beginning of the book piqued my interest right away.

"...on weekends I worked at a friend's stall on London's Portobello Road market. It was on one of my expeditions to find more stock for the stall that I came across a book on household management...More than anything it was the inscription that made me linger, for the book had been given to a young woman on the occasion of her wedding in July 1914 - just before the outbreak of what became known as the Great War."

Kezia has known Tom since coming home to visit from boarding school with his sister Thea. Their gentle friendship has blossomed over the years, growing into a love that is sure and steady. Thea gives Kezia 'The Woman's Book' as a wedding gift. There is more than a hint of a barb in her choice of gift. Thea thinks Kezia will be bored as a farmer's wife and is disappointed that she is giving up her career and life in the city.

But Kezia is sure of her choice and settles into life as a farmer's wife. Not without some bumps though - she has never cooked before. But Tom is happy no matter what she serves. Thea is pursuing her interests as well - she is part of the suffragette movement.

But their lives all change when Britain declares war on Germany. And Tom enlists.

Oh my, the letters between the two had me in tears. The love expressed between Kezia and Tom is heart wrenching. Winspear's choice to use food and meals as part of that expression is inspired.

Just as heart wrenching is the depiction of war and it's effects. Winspear is incredibly accomplished at bringing this time period to life. Her settings and descriptions of time and place create a vivid backdrop for her plot. The social customs, manners and mores of the times are all faithfully observed in Winspear's writing.

But it is the characters that bring the story to life. I became so invested in Kezia's life - her joy and sadness, her determination, her kindness and more. She seemed so real. Tom was just as well drawn. Thea was a prickly character, more difficult to like, but provided an alternate view on war.

Each chapter is prefaced with an excerpt from The Woman's Book, that relates directly to the chapter. I find historical views on women's roles fascinating.

From that inscription in an old book, Winspear has brilliantly imagined a war bride and groom and their love - and losses.....have an tissue box close by. Historical fiction fans, you'll want to add The Care and Management of Lies to your summer must read list. 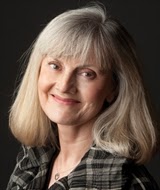 "Jacqueline Winspear was born and raised in the county of Kent, England. Following higher education at the University of London's Institute of Education, Jacqueline worked in academic publishing, in higher education, and in marketing communications in the UK. She emigrated to the United States in 1990, and while working in business and as a personal / professional coach, Jacqueline embarked upon a life-long dream to be a writer.

Jacqueline's first novel, Maisie Dobbs, was a National Bestseller and received an array of accolades." You can keep up with Jacqueline Winspear on Facebook.

See what others on the TLC Book Tour thought - full schedule can be found here.
Posted by Luanne at 6:30 AM

I've read a Maisie Dobbs book and liked it very much. Making a note of this one for the future.

I love reading letters between separated lovers ... it is so hearwarming and heartbreaking at the same time.

I'd love to know what it's like to be in the author's head if she can make these characters so true to life! What a gift.