A Line to Kill - Anthony Horowitz 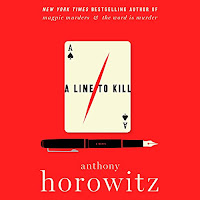 A Line to Kill is the latest entry (3#) in Anthony Horowitz's Hawthorne and Horowitz series.
I can't recommend this series enough. It's clever in so many ways. The protagonist is the enigmatic Hawthorn, let go from the police force and now working as a P.I. Hawthorne is such a great character - a brilliant detective, but somewhat lacking in personal interactive skills. I quite like him. And playing Watson to his Holmes? Anthony Horowitz. Uh huh - Horowitz has written himself in as a character in the series! He plays himself, writing about Hawthorne's cases. The relationship between the two is...interesting...
Hawthorne and Horowitz are invited to a literary festival that's being held on the island of Alderney to promote their first two books. They attend and meet the other presenters - who are a peculiar bunch. When a murder occurs and the island is locked down, Hawthorne's expertise is called upon. And Horowitz is along to document what may become the basis for their third book.(He fervently hopes so, as then his contract would be fulfilled and he'd be done with Hawthorne.)
I adore 'locked room' mysteries. There's always a wealth of characters to sift through for the final whodunit. None of them will tell the truth and we're along for the ride as Hawthorne interviews, investigates and pulls on the threads that will unveil the culprit. My suspect list changed with every revelation. Horowitz adds in his two cents worth as well. There is a large cast of possible suspects and I did have to stop and make a mental list of who was who. The mystery is well written, intricately planned and the final ah hah wasn't easy to suss out. But what I enjoy the most are the characters. I want to know more about Hawthorne's past. There are some hints and clues leaked in this latest, with one final revelation opening the door for the next book. My curiosity is more than whetted. And again the clever way Horowitz has inserted himself in the story. I wonder how much of the book character is Horowitz himself? The verbal sparring and mental jousting between the two is so much fun.
I've said it before and I'll say it again - I find that I become more immersed in a book when I listen. And this is definitely the case with A Line to Kill. The reader is Rory Kinnear and his reading is fantastic! Kinnear has narrated the first two books and has cemented the mental images I have created for this duo. Hawthorne's is low with a slightly gravelly tone and he speaks in measured tones. On the other hand Horowitz has more of a frantic tone, often incredulous, put out and frustrated. Supporting players have different tones, speeds, accents and more for both male and female characters. Again, all of them suit the characters. Kinnear easily captures the (real) author's work wonderfully. Kinnear's voice rises and falls, changes speed and timbre, capturing the emotions and actions as the plot dictates. His speaking is easy to understand. Hear for yourself - listen to an audio excerpt of A Line to Kill.
Posted by Luanne at 9:00 AM

Not an author I've read so I was so glad to read the review. I've just missed the book on Netgalley so will be looking for it elsewhere.

It's a very clever series Mystica - see if you can find the first in the series to start. I hope you enjoy them as much as I have.

I've long read the praises of Horowitz, but have yet to read his books myself. I love a closed-room mystery and am quite intrigued by the author inserting himself into his work.

Ethan, I think you'd really appreciate the cleverness of this series and many others.