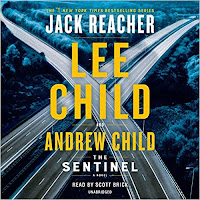 I had fallen a few books behind in Lee Child's Jack Reacher series, but when I read that he was passing the reins to his brother Andrew Child, I thought I would catch up with the latest (#25) - The Sentinel. Going forward it will be Andrew Child only.
Reacher does what he does best - just travelling across the country. His latest ride lets him off in Pleasantville, Tennessee. And true to form, he finds trouble when he see injustice and steps in to even the odds. Told to leave town, he digs his heels in even deeper.
I think that's what we all love about Reacher - he's the guy that will stick up for the underdog and right a wrong - in Jack Reacher style. And that style includes some great dialogue before the fists fly. "Rule one: if you don’t know the trouble you’re in, keep Reacher by your side."
This latest book has a fairly intricate plot bringing in a US Intelligence Agency, Nazis, Russians and more. Take that grain of salt and just enjoy a great escapist read.
Now, I am sure Jack Reacher purists will find some fault with someone new. Inevitable. (I noticed he talked a little more and used some technology) But for me, I was entertained and engaged with the book. And that's all I'm asking for - and The Sentinel delivered.
I chose to listen to The Sentinel. I was thrilled to see that the narrator had changed from previous novels and Scott Brick (a favorite of mine) was the new voice. He has the most expressive voice, easy to understand and great to listen to. He interprets the book very well and showcases the book fantastically. The action, tension and more are effortlessly presented for the listener. See for yourself - here's an audio excerpt of The Sentinel.
Posted by Luanne at 8:30 AM

Thank you for the review. A new author/s and book for me.

There's quite a few in the series Mystica - you won't run out for a while!