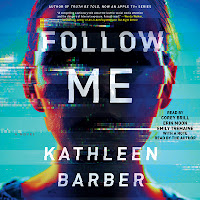 I loved Kathleen Barber's debut novel Are You Sleeping. (my review) Social media was a large part of that book and this latest, Follow Me, does as well.

Audrey Miller is an influencer on Insta, with over a million followers that eagerly await Audrey's next post. On the plus side, her social media savvy has landed her a dream job promoting an art gallery's exhibits. She rents an apartment unseen, moves a new city and reconnects with an old friend. And....lets all her followers know every step she's taking, every place she's been and more. Lots of followers for sure, but one of them has taken things to a new level - stalking.

Follow Me in told in three voices - Audrey, her old friend Cat and Him. We know the stalker is a man, but it could be any of the suspects Barber gives us to choose from - creepy guy at the apartment building, old flame, sketchy co-worker, new friend or random stranger. I honestly had no idea who the final aha was going to be. I was quite surprised by the final reveal. Barber does a great job of keeping the listener guessing.

I had a hard time liking Audrey and her somewhat narcissistic personality. Okay, maybe a bit more than somewhat. She's a bit of a user. But it absolutely works in this plot. There are a number of times she disregards the danger in front of her and blithely carries on - the equivalent of a movie 'don't go in the basement'. But again, integral to the plot. Good friend Cat has her own issues, but I shared her frustration with Audrey. And that brings us to the third voice - Him. Wonderfully (and frighteningly) drawn! His obsessions, delusions and stream of consciousness thinking are terrifying.

I chose to listen to Follow Me. I've said it before and I'll say it again - I always feel more immersed in a story when I hear it. I really liked that there were three narrators for Follow Me. And even more so when there are multiple narrators. The three for this book were excellent choices. - Corey Brill, Erin Moon and Emily Tremaine. Brill's voice for Him is suitably creepy and suited the unstable nature of this character. He interprets the plot very well and his tone and intonation reflects that. I'm not sure which woman read which part, but again they were both very well suited. Audrey's voice is strong in tone and captures the self centeredness of the character. The reader for Cat employs a softer voice that depicts the uncertainty of this player very well. All three were easy to listen too, were well enunciated and easily understood. Hear for yourself - here's an audio excerpt.

Make sure you listen to the author's notes on writing this book - absolutely creepy. And the most alarming thing? This is completely plausible.
Posted by Luanne at 7:00 AM