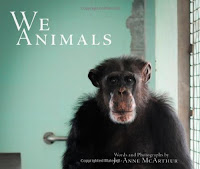 What books caught my eye this week as they pass over the library counter and under my scanner? This week it's pictorials - from the animal world....

First up is We Animals by Jo-Anne McArthur

From the publisher, Lantern Books:

"Drawn from a thousand photos taken over fifteen years, We Animals illustrates and investigates animals in the human environment: whether they're being used for food, fashion and entertainment, or research, or are being rescued to spend their remaining years in sanctuaries. Award-winning photojournalist and animal advocate Jo-Anne McArthur provides a valuable lesson about our treatment of animals, makes animal industries visible and accountable, and widens our circle of compassion to include all sentient beings."

Next up is Dragonflies by Pieter Van Dokkum.

From the publisher, Yale University Press:

"Almost without our noticing, dragonflies dart through our world, flying, seeing, hunting, mating. Their lives are as mysterious as their gossamer wings are beautiful. In this book Pieter van Dokkum reveals many of the dragonfly’s secrets, capturing the stages of this striking insect’s life cycle in unprecedented close-up photographs. He documents scenes of dragonfly activity seldom witnessed and rarely photographed.

The book begins on a moonlit summer night, when an alien-looking larva crawls out of the water and transforms into a fully formed dragonfly. In the following chapters we witness dew-covered dragonflies sparkling in the morning sun, then a pair of mating dragonflies moving through the air in a twelve-legged, eight-winged dance. In the final chapter, one generation dies as the next prepares to leave the water and begin its own winged journey. Each stage is documented through van Dokkum’s inquisitive lens and accompanied by information on various species of dragonflies and damselflies, their metamorphosis, and their ecological importance as insect predators."

(Over the Counter is a regular feature at A Bookworm's World. I've sadly come the realization that I cannot physically read every book that catches my interest as it crosses over my counter at the library. But... I can mention them and maybe one of them will catch your eye as well. See if your local library has them on their shelves!)
Posted by Luanne at 8:00 AM