Giveaway - Life of Pi on Blu-ray! 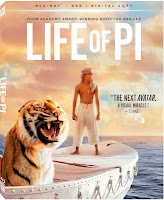 You've read the book - you loved it. You've heard the movie is fantastic and want to see it. How about owning it?!! That's right - I have two Blu-ray copies to give away to two lucky readers. Open to US and Canada, ends March 12. Simply leave a comment to be entered!!

"Believe the unbelievable.  Twentieth Century Fox Home Entertainment presents a groundbreaking cinematic experience you will have to see to believe when LIFE OF PI debuts on stunning Blu-ray 3D, Blu-ray and DVD on March 12.


Based on the acclaimed best-selling novel from Yann Martel that has been published in 40 languages, and brought to life by visionary Academy Award winning director Ang Lee (Brokeback Mountain, Crouching Tiger, Hidden Dragon), this magical adventure of hope, wonder, survival, and the power of the human spirit has been celebrated by critics all over the world.  A “magnificent and moving” (Peter Travers, Rolling Stone) motion picture event that has been hailed as “a masterpiece” (Betsy Sharkey, Los Angeles Times), taking in over $500 million in worldwide box office.


LIFE OF PI follows Pi Patel, a young man on a fateful voyage who, after a spectacular disaster, is marooned on a lifeboat with the only other survivor, a fearsome 450 lb. Bengal Tiger named Richard Parker. Hurtled into an epic journey of adventure and discovery Pi and his majestic companion make an amazing and unexpected connection. "

The book and the movie are both on my list of books to read and movies to see. I've heard that both are excellent.

I was really unaware of what this was about until the Oscars. Now I would love to have the DVD!
kpbarnett1941[at]aol.com

This wonderful giveaway interests me very much. Thanks for this chance. saubleb(at)gmail(dot)com

Life of Pi is one of my all time favourite books. I could read it a million times over. Yet I still haven't seen the movie!

The book is excellent. Looking forward to the movie.

I would absolutely love to be entered. I am reading the book now!!

Thanks for this feature. Both are so appealing and special. elliotbencan(at)hotmail(dot)com

I haven't read the book, but have heard that it's really good. Would love to see the movie! Thanx! :)

I didn't love the book like everyone else did so didn't spend the money to see this in the theater. Thanks for the chance to win a copy! kathy(at)bermudaonion.net

I haven't read the book or seen the movie but it looks good
msboatgal at aol.com

This looks great - thanks for the opportunity!

I heard so many good things about the movie but I didn't get a chance to see it. Please enter me in your drawing.
suefarrell.farrell@gmail.com

I was not a fan of the book but would love to see the film Thanks so much for the chance to win.

Wonderful giveaway, thanks for the opportunity!

Would love to see this!

I haven't read the book, or seen the movie, but I love Ang Lee, and his films, so I would to see "Life of Pi".

this is a beauitful movie, I saw it the night of the Oscars. What a great story the way it unfolds and it's visually stunning as well. I hope I'm the lucky winner.

I cannot wait to see this!!!

I have not seen the movie but read the book..it was wonderful!
Great giveaway
Greatest Blog!!!
kathy.whitworth@lpl.london.on.ca

This movie looks stunning, thanks for the giveaway!

This movie looks stunning, thanks for the giveaway!

This was an amazing movie! I would love to add to my collection.

Can't wait to see it, especially after all the great awards it won! Thanks!
JHolden955(at)gmail(dot)com

I've had this book for quite some time but have put off reading it so I could watch the movie right away after reading it. Thank you for the opportunity!

I really want to see this movie and read the book! Thank you so much for the awesome contest!

I read the book years ago and I can't wait to see the movie!!!

My husband and I just read the book and are really eager to see the movie.

In all honesty I have read the book and I hated it with a passion. However, the movie looks interesting and maybe seeing it on screen will change my opinion ... we will see ;)

One of my all time favorite books - I have read and re-read it at least 30 times. Thanks for the chance to win a copy of the movie! :-)

I cannot wait to see 'Life of Pi'! Thanks for having the giveaway!

Is it bad if I haven't seen the movie yet? Hope I win.
deannalw47 AT hotmail DOT com
xo

i loved this movie and I really wanna win this

Loved the book, can't wait to see the movie. Never got the chance in the theater.

Thanks I really wanted to see the movie but our town doesn't have a movie theater.

been wanting to see this one! - regnod(at)yahoo(d0t)com

I have heard so much about this movie, I just have to see it! I hope I win!
Califkitties @ aol.com

Thanks for the giveaway! The movie looks beautiful.

This movie looks excellent! Thanks for posting this!

I definitely want to see this one - I love animals and especially cats!

I wonder which ending you believe? I loved the book and did not make it to the theater as intended.
Also wanted to thank you for introducing me to Louis Penny. I can hardly wait to listen to the next book of the series.

It would be great to own this so I have time to read it before I see the movie. If I rent the movie, I'd have to rush.

I loved this book yet bizarrely (or maybe not so bizarrely if you knew my family and friends) no one would go see this with me; so I haven't seen it!