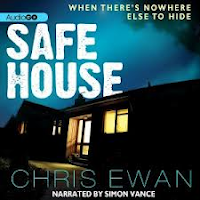 An intriguing premise and a reader that I really like = one good listen. That was the winning combination with Chris Ewan's book Safe House and Simon Vance's narration.

Safe House opens up with a great opening gambit. Plumber Rob Hale is doing some heating work at an isolated house. Lena - the young woman staying there - asks to go for a ride on his motorcycle. But, they crash. Rob wakes up in the hospital and one of his first questions is 'How is Lena '? And the answer is unexpected - there was no girl - he was found alone. But he knows that can't be true.....he remembers....or does he.....Rob is determined to track the girl down. His family is more concerned with his mental health - the family has suffered a recent  tragedy.

Ewan weaves a tangled web of lies and deceit in Safe House. The plot went in directions I did not see coming at all - from environmental activists to a multinational oil conglomerate to the British Security Services, private investigators and more. Ewan definitely held my interest with this inventive plotline.

I quite enjoyed the character of Rob (and Rocky the dog!) Vance does a fantastic job bringing this character to life - the voice he used was 'real'. Rob came across as an honest everyman trying to make sense of a crazy situation. He just sounded trustworthy. There are plenty of players, but Simon Vance does an admirable job with creating a voice for every character, making each immediately identifiable. His accents are believable. Vance's voice is rich and resonant and easily communicates the action and tension of the story. He truly is one of my favourite readers.

Chris Ewan makes his home on the Isle of Man and uses this as the unique setting for Safe House. I was quite fascinated with the description of the island, the  motorcycle races and that this is where the Manx cat originated.

This was a great introduction to a new to me author and a really entertaining listen. You can find Chris Ewan on Twitter.                  Listen to a sample of Safe House.