Over the Counter #1 - Weekends at Bellevue - Julie Holland M.D. 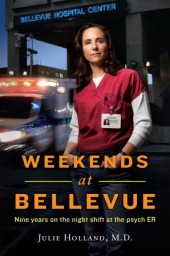 This is the first entry of a new feature at A Bookworm's World. I'm sadly coming to the realization that I cannot physically read every book that catches my interest as it crosses my counter at the library. But, I can mention them and maybe one of them will catch your eye as well!

I love memoirs and this one looks fascinating.

The subtitle: Nine years on the night shift at the psych ER.

"Julie Holland thought she knew what crazy was. Then she came to Bellevue.

New York City’s Bellevue Hospital, the oldest public hospital in the United States, has a tradition of “serving the underserved” that dates back to 1736. For nine eventful years, Dr. Holland was the weekend physician in charge of Bellevue’s psychiatric emergency room, a one-woman front line charged with assessing and treating some of the city’s most vulnerable and troubled citizens, its forgotten and forsaken—and its criminally insane. Deciding who gets locked up and who gets talked down would be an awesome responsibility for most people. For Julie Holland, it was just another day at the office.

In an absorbing memoir laced with humor, Holland provides an unvarnished look at life in the psych ER, recounting stories from her vast case files that are alternately terrifying, tragically comic, and profoundly moving: the serial killer, the naked man barking like a dog in Times Square, the schizophrenic begging for an injection of club soda to quiet the voices in his head, the subway conductor who watched a young woman pushed into the path of his train. As Holland comes to understand, the degree to which someone can lose his or her mind is infinite, and each patient’s pain leaves a mark on her as well—as does the cancer battle of a fellow doctor who is both her best friend and her most trusted mentor.

Writing with uncommon candor about her life both inside and outside the hospital—her professional struggles, personal relationships, and the therapy sessions that help her crack the hard shell she’s formed to keep the pain at bay—Holland supplies not only a page-turner with all the fast-paced immediacy of a TV medical drama but also a fascinating glimpse into the inner lives of doctors who struggle to maintain perspective in a world where sanity is in the eye of the beholder."

Read an excerpt from Weekends at Bellevue.

If you've read and reviewed this book, let me know - I'll link your review.

I actually remember reading a good review of this one somewhere.

I've got this one on my Kindle. I'm sure I'll read it at some point. I hear ya about not being able to read all the books that catch your eye. I used to process the new books when I worked for the library and my eyes were definitely too big for my bookshelf! LOL

Not my kinda book but seems nice nevertheless :)

Oh, interesting! Psychology is a fascinating topic, and it would be great to read about it from a doctor's point of view.

I remember hearing about this book was it last year or so.