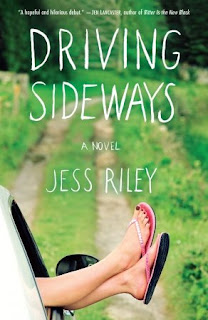 As promised... Here's the review of Driving Sideways by Jess Riley !

In the first few pages we meet Leigh Fielding. She has lived with her brother since her mother abandoned them and their beloved Gran passed away. Her poor health (she suffers from PKD - Polycystic Kidney Disease) - has dictated her living a "safe"life.

However... she has recently received a kidney transplant from the late Larry Resnick and feels good for the first time in years. So good that she plans a road trip to California. Against her brother's wishes she sets out alone on ' The Unfinished Business Tour.' The unfinished business includes: visiting an old boyfriend, meeting her best friend's elusive boyfriend, meeting and thanking her kidney donor's family and confronting her mother.

Not too far into the trip, Leigh is coerced into letting a teenager ride with her. They are soon joined by Jillian, a friend of Leigh's. 'Larry' is frequently channeled for direction. And just who is in that black Acura they keep seeing? The trio's adventures are comical and entertaining. That's not to say it's all fun and games. Leigh didn't expect to live past thirty and is going through a lot of self discovery.

Riley's characters are witty, full of life and so engaging. Their dialogue rings true - just like you were having a conversation (or argument!) with your best friend. The banter, the references to pop culture all bring the book to life. Leigh's imagination in painting possible scenarios is hilarious.

I hesitate to lable this book as strictly chick lit. It is so much more - an examination of the fragility of life, relationships with family and friends and what, in the end, is really important.

I was happy that Riley did not tie everything up into a neat package. It rings truer the way she has written it.

Jess Riley is pretty funny herself. Check out her blog Riley's Ramblings.

This is a great book to share with your friends. Honestly, I just want to make some calls and hit the road!!

Thank you, Luanne! I am so happy you liked it.

I am indeed working on the next book! I'm toying with the idea of having Leigh make a cameo in it. :)